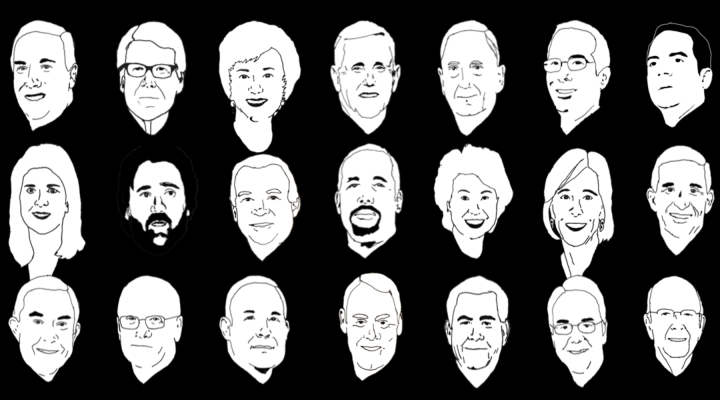 President-elect Donald Trump is not done filling out his administration, but his picks so far already reflect deep ties to major industries. Topping that list are the oil, gas and energy industry and the financial sector, where many of Trump’s nominees run companies, or sit on boards. Here are just a few:

The most prominent of these connections is the nominee for secretary of state, ExxonMobil CEO Rex Tillerson. ExxonMobil began drilling operations in Russia despite U.S. sanctions that prohibit doing business with the country. If Tillerson’s appointment is approved by the Senate, he would oversee foreign relations on behalf of the U.S.

Then there’s former Texas governor Rick Perry, who sits on the board of Sunoco Logistics Partners and Energy Transfer Partners. Sunoco plans to buy Energy Transfer Partners, which is the company behind the controversial Dakota Access oil pipeline. Additionally, Perry had close ties to a waste disposal company that is interested in storing nuclear waste. If his nomination is approved, Perry would head the Office of Energy, which oversees the environmental cleanup of the national nuclear weapons complex.

The president-elect is well-acquainted with the finance industry, and he has picked veterans of influential firms to join his inner circle. Trump has two former Goldman Sachs bankers on his list: his nominee for secretary of the treasury, Steve Mnuchin, and his soon-to-be Chief Strategist Steve Bannon. While Bannon’s more recent ventures tie him to media and entertainment, Mnuchin continues to stick to finance.

Mnuchin is the co-CEO of Dune Capital Management, a hedge fund he founded in 2004. During the 2008 financial crisis, Mnuchin bought IndyMac for $1.5 billion. IndyMac was the second largest bank failure of the 2008 financial crisis, and the Federal Deposit Insurance Corporation (FDIC) agreed to cover as much as 75 percent of the bank’s losses. Mnuchin renamed it OneWest Bank, which faced scrutiny for its foreclosure practices and complaints that it was not meeting its legal obligation to make loans in minority neighborhoods. In 2014, Mnuchin sold OneWest to commercial lender CIT Group Inc. for $3.4 billion. As Treasury Secretary, Mnuchin will influence policy regarding Wall Street regulations that directly affect some of the companies he has worked with.

Wilbur Ross, Trump’s pick for secretary of commerce, also has some notable connections. Known as the “bankruptcy king,” Ross has made billions of dollars off leveraged buyouts, reforming and merging failing companies and turning a profit on their resale. He runs private equity firm WL Ross & Co., which he sold to investment firm Invesco in 2013. Filings from May show Trump holding $250,000-$500,000 worth of shares from the Invesco European Growth Fund.

Other industries represented among Trump’s administration include manufacturing, and entertainment and media. Check out all the connections in our complete guide.