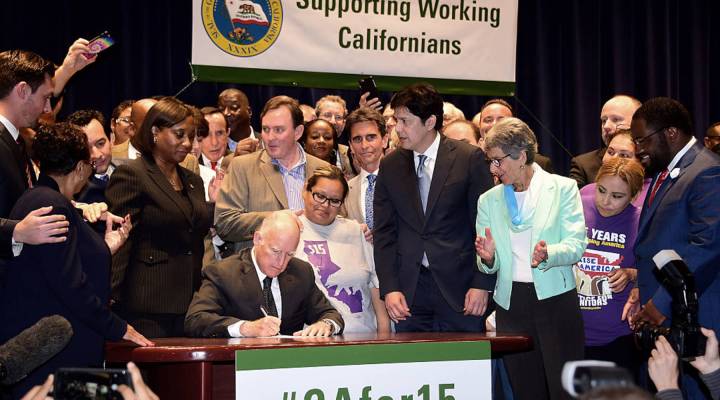 COPY
California Governor Jerry Brown signs the bill that will raise the state's minimum wage to $15 an hour by 2022 while surrounded by supporters and politicians on stage at the Ronald Reagan State Building in downtown Los Angeles, California on April 4, 2016.  FREDERIC J. BROWN/AFP/Getty Images

California Governor Jerry Brown signs the bill that will raise the state's minimum wage to $15 an hour by 2022 while surrounded by supporters and politicians on stage at the Ronald Reagan State Building in downtown Los Angeles, California on April 4, 2016.  FREDERIC J. BROWN/AFP/Getty Images
Listen Now

Congress hasn’t raised the federal minimum wage — now $7.25-an-hour — since 2009.  But many states and localities have, and there will be new minimum wage hikes in lots of places around the country starting on Jan. 1.

Some of the rates are indexed to inflation, or vary by business-size, or location. What does this mean for businesses, and for workers? The answer depends on who you talk to.

The patchwork effect is “wildly confusing” for businesses, according to Michael Saltsman of the Employment Policies Institute, which is supported, in part, by the restaurant industry. And it may force businesses that can’t raise prices to close, or move across the border to a state with a lower minimum wage, he said.

But economist William Rodgers, at Rutgers University, doesn’t think that’s likely to happen very often. Plus, retail and restaurant businesses may actually get a boost from higher spending by low-wage workers — as their wages rise — so they can spend more money on groceries, or clothing, he said.

Click the audio player above for the full story.