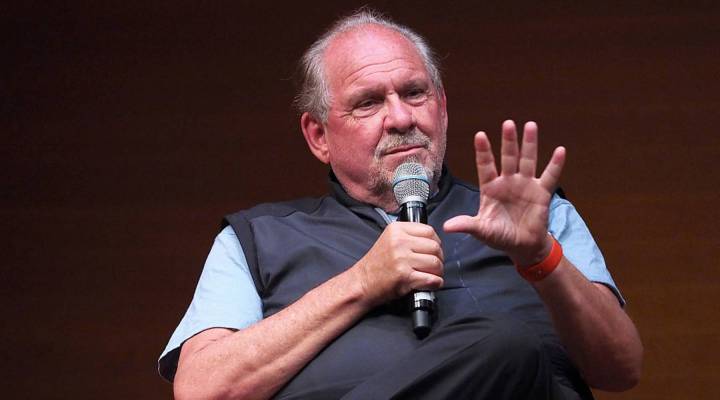 Back in the 1970s, physician Larry Brilliant was studying at a Himalayan ashram when the Hindu sage and head of the monastery, Neem Karoli Baba, gave him a mission: Leave the monastery, travel to Delhi, India and help eradicate smallpox.

And that’s exactly what Brilliant, a former team doctor for the Grateful Dead, and other members of the World Health Organization did.

The self-professed “rock doc” recounts this and other memorable events, like his traveling days with rock ‘n’ roll bands, in the memoir “Sometimes Brilliant.” He joined us to talk about how his experience with fighting smallpox inspired him to keep working toward a sense of hope and unity, especially during troubling and divisive times.

On learning about his mission to rid the world of smallpox:

The teacher that we were living with says to me that my destiny is to leave the meditation of the monastery, and go down to Delhi and work with the United Nations — because this terrible disease smallpox was going to be eradicated as a gift from God to lift one form of suffering from the backs of humanity. And that sounded as strange to me then as it probably sounds to you now.

Brilliant on being turned away from the United Nations team when he first volunteered:

Actually, they kicked me out. They didn’t like the kurta pajamas that I was wearing. It looked like a dress, and my beard was down to my knees. And of course I’d never seen a case of smallpox and never done anything like that. They should’ve kicked me out.

This is a disease which, in the 20th century, killed over 500 million people. …That’s more than all the people who died in that terrible century from all the two world wars and the Holocaust and all of the genocides. …In fact, David, during the “Summer of Love,” when I was a hippie in San Francisco, there were 3 million people all over the world dying of smallpox. It’s not that it was so long ago, and when smallpox was eradicated, it was the end of an unbroken chain of transmission that went back to the Pharaohs.

It was a terrible movie, don’t go see it. The only fun part of it was, you know, being a “rock doc.” I got to listen to the great music of The Grateful Dead and The Jefferson Airplane. And we ended that movie with a rock concert in Canterbury – Pink Floyd, Dark Side of the Moon. And I was in the little tent being the rock doc. And then we all decided that we wanted to stay on these buses, even though the movie was over, and take these kind of hippie buses from England all the way to Kathmandu. And we lived on – 40 of us lived on two buses for almost two years, driving through Iran, Afghanistan, Iraq, Pakistan.