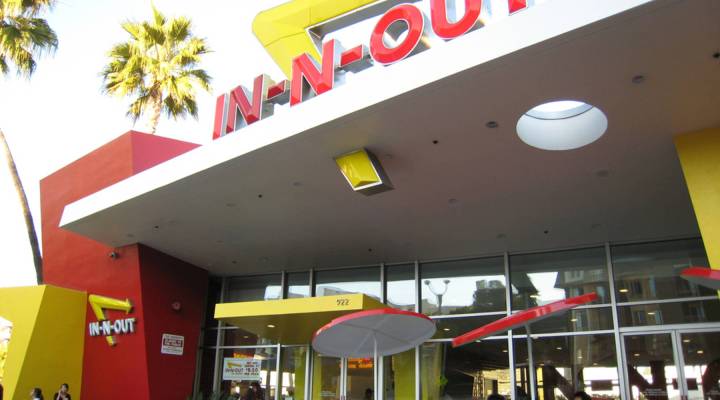 If you don’t live in a state that has In-N-Out Burger, you might roll your eyes: recent data said In-N-Out Burger has some of the most loyal customers in the fast food industry.

For people outside of California, Arizona, Nevada, Utah, Texas and Oregon, that doesn’t mean much. In its nearly 70 years, the chain hasn’t expanded far from the Los Angeles suburb where it was founded. Is that why customers told analysts they’d recommend the restaurant to their friends?

“In-N-Out is a bit of a scarce resource,”  YouGov BrandIndex CEO Ted Marzilli told Business Insider. His company conducted a survey asking respondents whether they would recommend different restaurants to a friend. In-N-Out outscored all other fast food spots, barely edging out Chick-Fil-A, another regional brand. The theory goes: people like to brag about going there and the regional mystique is the best marketing a restaurant could buy. Plus, there are plenty of hot takes, similar to this one, that say In-N-Out is overrated.

“There are so many components that are overlooked,” he said. “Basically missing about 95 percent of the picture here, when we talk about at loyalty at In-N-Out Burger because that’s not the only area where [it] scores so high consistently.”

In Technomic’s research, In-N-Out scores high on other factors like customer experience and value. One could feed a family of four for less than $20, Byrne noted. Customers also rate the store highly on “craveability,” he said. It’s an subjective measure — when you’re craving a certain kind of food, what do you reach for? But taste is subjective too, and In-N-Out tests well on both compared to other fast food. Plus, its longstanding “always-fresh-never-frozen” ethos is in line with current food trends.

So there’s a lot of reasons for In-N-Out’s success, but could it still be overrated? Byrne said that’s unlikely, because Technomic conducts surveys with people who have been to the restaurant in the past month. In the case of In-N-Out, those people are overwhelmingly on the West Coast or the southwestern U.S.

“In the Midwest, there were a handful of people who responded to In-N-Out Burger — it’s not even really a statistically reliable number,” Byrne said. “These high ratings that we’re getting are driven by people who consistently have access.”

Does that mean In-N-Out could go national, without losing its exclusivity?

“Not in my lifetime,” Byrne said. In-N-Out is vertically integrated, he said. It has no franchises, and it took six decades for the company to open a second distribution center in Texas. Those supply chains, for beef especially, would be tough to replicate nationwide.

But none of that means In-N-Out would lose its luster if it tried — even if it’s burger isn’t as good as SoCal denizens say.

“Everyone’s entitled to their opinion, I believe that, but I think it ignores whats behind that loyalty,” Byrne said. “The people who can get it are loyal and they say it’s awesome.”