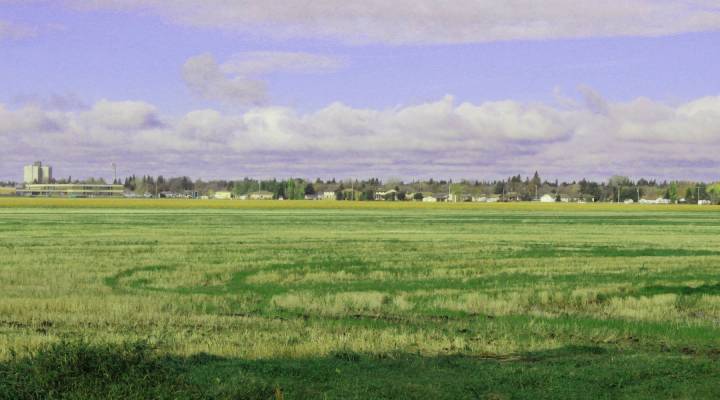 COPY
Dauphin, Manitoba, a small farming town on the Canadian prairie, was the site of a basic income experiment in the 1970's. Sarah Gardner

Dauphin, Manitoba, a small farming town on the Canadian prairie, was the site of a basic income experiment in the 1970's. Sarah Gardner
Listen Now

The idea of a guaranteed basic income has been around for decades, but it’s come back into fashion with the rise of automation and temp work. Under a universal basic income, the government cuts everyone a monthly check, no strings attached, to meet basic needs. The U.S., under President Richard Nixon, considered a form of basic income called a negative income tax, but it never passed. Today, a handful of governments are planning basic income experiments, including the Canadian province of Ontario.

It’s not the first time Canada has flirted with a basic income. Forty years ago, in Manitoba, the Canadians conducted a five-year experiment in the little prairie town of Dauphin. The results, which didn’t come to light until fairly recently, suggest the safety net could carry social benefits that save money long term.

The experiment was called Mincome, for “minimum income.” The impetus came from Canada’s political Left, under Prime Minister Pierre Trudeau and Manitoba Premier Edward Schreyer. Evelyn Forget, an economist at the University of Manitoba who has studied the Mincome data, said the experiment was widely known in social science circles, but most Canadians weren’t aware of it.

The Mincome study was conducted in several places, including Winnipeg. But the most interesting pilot was in Dauphin, a small farming town more than three hours northwest of Winnipeg. A large, tight-knit Ukrainian community there was partly why researchers chose it. They figured not many residents would move over the course of the experiment, according to Ron Hikel, the political scientist who managed the Mincome projects.

When Marketplace visited Dauphin this past fall, signs of the town’s Ukrainian heritage were still evident, including onion-domed Ukrainian churches, a Ukrainian bilingual elementary school and the headquarters for Canada’s National Ukrainian Festival.

Dauphin, Manitoba was settled, in part, by Ukrainian immigrants. The Ukrainian Orthodox Church of St. George sits just up the street from a Ukrainian biliingual elementary school.

At the time, the Canadian government was particularly concerned about how a basic income might help the working poor and unemployed. The program guaranteed a family’s annual income would never fall below a basic amount. For a family of four, that was about about $16,000 in today’s Canadian dollars. If they did earn some money, the Mincome check kept coming, just at a reduced rate. So, for example, if they earned ten dollars extra, their Mincome check would go down by $5. So working was still rewarded. Hikel described it as “probably the biggest controlled social science experiment in Canada” at that point.

A Mincome handbook from the 1970’s talks about a basic annual income as a possible “efficient way of making sure that all Canadians have a reasonable and secure income, including those who are working.”

About a third of Dauphin’s residents were poor enough to qualify for the subsidy. But not everyone who was eligible for the extra cash wanted it. Irene Yarema Whitwell, 54, teaches at the Ukrainian school. She says her aunt refused to participate.  “People used to talk to her on the side and say, you know, you should get it. You could get it, you know? But my aunt was proud, eh?”

School teacher Irene Yarema Whitwell, 54, says a basic income might be a good thing, but first she’d want to know the cost and if it would hurt other Canadian benefits, like universal healthcare.

Stephen Chychota, the 28-year-old executive director of Dauphin’s Chamber of Commerce, grew up in Dauphin but said he hadn’t heard of Mincome until he saw a post on Facebook two or three years ago. “My initial thought was maybe this was some kind of fake advertisement or something, right?” he said. “But then you kind of look into it a bit more, and it actually happened.”

It happened, but was forgotten soon after. When the Mincome study ended, a new conservative government was in power. It had little interest in funding an analysis of its predecessor’s project. “The researchers were told to archive the data for future analysis,” said Evelyn Forget. “And as far as I can tell that meant empty the filing cabinets into cardboard boxes and lock the door on the way out.”

Those boxes, full of mimeographed surveys and handwritten assessments, sat in a government warehouse for decades, largely forgotten. Around 2008, Forget discovered them and has been analyzing the results since.

The initial results are striking: the vast majority of Mincome participants kept working.

Primary wage earners worked a little less, but only slightly.

Married women backed off too, but mostly to take longer maternity leaves.

There was a drop in work by teenage boys, but Forget says many simply were able to stay in high school longer. Their families weren’t as desperate for another breadwinner.

Forget said the income helped people live beyond the next paycheck. “The idea was to create a little bit of cushion,” she said.

The data from Canada’s Mincome experiment was never analyzed by the government. Around 1,800 boxes of material can be found at the national archives in Winnipeg.

Forget said Mincome also appears to have boosted well-being. Hospitalizations fell significantly, especially for mental health problems. That extra money may have relieved some of the stress of “getting by.”

“It doesn’t surprise me,” she said. “The amount of stress that a family operates under is strongly related to the amount of money a family has.”

Eric Richardson, 54, said the Mincome money made a difference to his family of six kids. His mom was a hairdresser and his dad had retired early due to health problems. He remembers his parents bought a new table and chairs with the subsidy, for one. It also meant his family could afford to send him to the dentist.

“So this is a kid who’s like, 10 or 11 years old, my first trip to the dentist,” Richardson said. “Well I had about 10 cavities. So the dentist at the time, Mr. Heschuk, he’d fill your teeth with no freezing, eh? So, you’ll remember stuff like that,” he said, laughing.

Eric Richardson’s parents received the Mincome subsidy and bought a new table.  He still has it. “They were given the money and they had the freedom to use it as they saw fit,” said Richardson.

Betty Wallace, 87, took part in Mincome, too.Wallace and her husband were raising sheep and training saddle horses in the mid-70’s. They earned the equivalent of about $24,000 in today’s Canadian dollars. She said they didn’t feel poor. They had a vegetable garden, plenty of wood for the cook stove, and neighbors who shared hand-me-downs.  But she said Mincome helped them expand their business.

They bought a used one-ton GMC truck. It was more reliable than two others they feared couldn’t handle another Manitoba winter. “We could put four horses in it, we could haul hay, we could do everything imaginable with the thing and it pulled trailer like a charm,” Wallace recalled.  She still has the truck.

Evelyn Forget said she has no doubt that a universal basic income in Canada would mean higher taxes. But she believes it could be designed in a way to replace some current social benefits so the taxes wouldn’t be excessive. The bigger hurdle, she said, is changing people’s attitudes toward work.

“If you think about caring for family, parents, a husband or children, it’s important work but doesn’t carry a paycheck,” Forget said. “Artists and writers who get paid little but enrich society. We have to broaden our idea of productive work.”