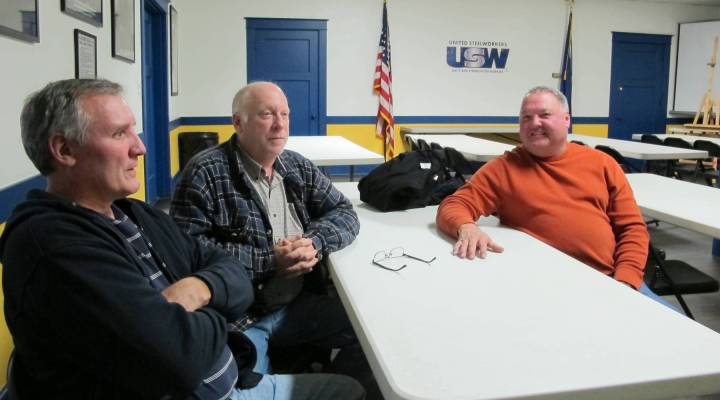 COPY
David Holzman, center, sits with fellow laid off steel workers ahead of a union meeting in Granite City. In southwestern Illinois, the steel industry has been an anchor in the community for decades. Kimberly Adams/Marketplace
The Big Promise

David Holzman, center, sits with fellow laid off steel workers ahead of a union meeting in Granite City. In southwestern Illinois, the steel industry has been an anchor in the community for decades. Kimberly Adams/Marketplace
Listen Now

During a presidential campaign, candidates make a lot of promises. History shows us the winners often have trouble keeping them. Many supporters of President-elect Donald Trump are looking to him to keep many of his campaign promises about bringing back manufacturing jobs, especially in industrial towns that have borne the brunt of job losses in recent years.

In southwestern Illinois, the steel industry has been an anchor in the community for decades. The mill feels like a city unto itself, with mountains of raw materials and weathered buildings that stretch for blocks. Usually, the parking lots around the U.S. Steel facilities are full of cars, but weeds are peeking through the cracks in the asphalt in some of those lots now.

“It looks like a ghost town,” said Dan Simmons, president of United Steelworkers local 1899. That’s because hundreds of steelworkers here have been laid off in recent years.

“Actually we have currently about 437 members working,” said Simmons at the local union hall ahead of a meeting. “And for a brief time, those people weren’t working and then you see tumbleweeds going through the plant.”

He was getting ready to deliver good news to his members, many of whom have been out of work for more than a year. The Illinois government had just agreed to extend unemployment benefits through the holidays.

Michael Hicks, the director of the Center for Business and Economic Research at Ball State University, said because steel jobs tend to be concentrated in a few areas, “the impact that’s felt by even a small disturbance in international trade is very heavy in those communities. But it goes almost unnoticed by the rest of the country.”

USW’s Simmons said for every lost steel job in Granite City, seven other jobs are affected. That can mean the materials suppliers, the scrap yard, even the doughnut shop in a renovated gas station across from the mill. They’re all feeling the hit. And the laid off steel workers themselves are hard-pressed to find other jobs that pay even half of what their old jobs did. So many are hoping a new administration means things will change for the better.

“I got hopes for Trump,” said David Holzman, who  lost his job in January after 26 years. “I hope he delivers on his promises.”

Holzman is skeptical, though. He voted for Hillary Clinton, the candidate backed by United Steel Workers nationally. But many of his co-workers latched on to Trump’s message.
Some broke with the USW and supported the Republican candidate.

David Holzman was laid off from his job at U.S. Steel in Granite City in January. Like his union, he supported Hillary Clinton in the election, but is hoping Donald Trump will keep promises to bring back steel jobs.

Many of those Trump supporters felt validated earlier this month when Trump announced a deal to preserve some jobs at Carrier in Indiana.

“He’s already done something with the Carrier [deal] so things could be looking up in that respect,” said 62-year-old Scott Nailor, who worked at the mill for 21 years before being laid off. “I’m kind of hoping maybe by the first of the year maybe things will turn around for the steel industry and hopefully I go back to work.”

Even so, Nailor isn’t expected what happened in Indiana to necessarily be duplicated across every industry.

“I look for it to be more of a policy change instead of him actually getting involved with it personally,” he said. “He’s not going to have the time to do that.”

Scott Nailor voted for Trump in the election, and was encouraged by the president-elect’s deal with Carrier to preserve some jobs in Indiana.

Plus, other states may not be as willing to cut the same kind of deal as Indiana, which is giving  Carrier millions in tax breaks to save fewer than half the jobs the company planned to outsource. Clinton supporter David Holzman was not impressed.

“I think it was a publicity stunt,” he said of the deal. “I’m glad it worked. But he’s going to have to do it a whole bunch more times before I’m going to vote for [Trump] next time.”

According to the union’s Simmons, steel workers like Holzman may end up getting their jobs back regardless of what Trump does. That’s thanks to an ongoing crackdown on international steel dumping.

“We see the steel prices already increasing,” said Simmons, “and along with that we see the demand starting to pick up a little bit. So the normal order of business and demand is going to get us back to work.”

In fact, just this week, U.S. Steel said will it bring back more than 200 jobs at the Granite City site by mid February. Michael Hicks at Ball State says the old days won’t be coming back with those jobs because while trade is part of the reason for the loss of steel jobs, other trends like automation and increased efficiency can’t be rolled back.

“You could see an uptick in steel jobs, but we’re just not going to return to the 30,000 or 40,000-person steel towns of Gary, Indiana or Pittsburgh that we saw 50 or 60 years ago,” said Hicks. “Those days have passed and there’s no public policy that can bring them back.”