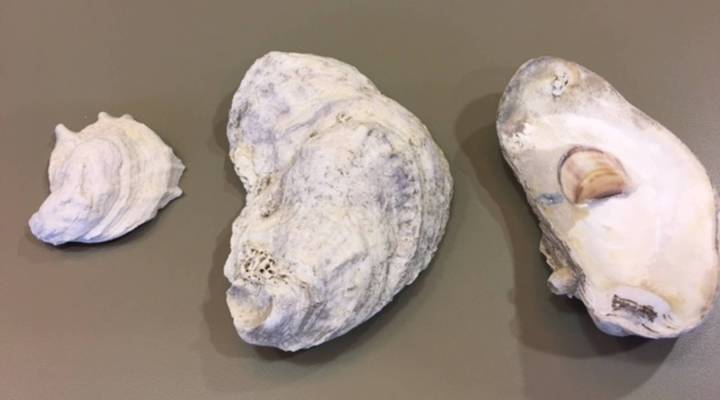 People have strong opinions about oysters. Some love them, some can’t stand them. But Americans eat a lot of them. East Coast cultured oyster production has doubled in the past five years. Supply can’t meet up with demand. In Rhode Island, some people are turning public land into oyster farms and other land owners don’t like it.

The Ocean State Shellfish Cooperative is down the road from Narragansett Pier, a touristy spot on the ocean in southeastern Rhode Island. The co-op has six oyster farmers. They bring their harvested oysters to the warehouse, where they’re bagged for a distributor who sells them to restaurants in Boston, New York, and Philadelphia. By banding together, the oyster farms are, more or less, sustainable. The co-op’s manager, Graham Brawley, has been farming oysters for decades.

“I do this three days a week and then spend the rest of my time working as an electrician,” he said.

Another oyster farmer in the co-op, Perry Raso, has a second job, too, but for a different reason. He opened the Matunuck Oyster Bar because he expanded his farm and needed a place to sell his oysters.

“I didn’t want to do a restaurant, that’s just kind of how it developed,” he said.

The spread of oyster farms in Rhode Island makes a lot of sense. It brings jobs to the local economy, helps keep up with demand for oysters, and the oysters improve the water quality. But Dave Beutel, aquaculture coordinator with the Rhode Island Coastal Management Council, said there’s a problem.

“For marine aquaculture in Rhode Island, all of it is on state land,” he said. “There’s no alternative.”

Oyster farms then have to share the state waters with everyone else. The most contentious waters in southern Rhode Island are coastal lagoons – what Rhode Islanders call salt ponds. And that’s where oyster farmers are populating most of their crop, because the water is shallow and it’s easy to farm there.

Art Ganz, president of the Salt Pond Coalition, a conservation group trying to limit the spread of oyster farms, worked for more than 25 years trying to promote aquaculture. He thinks what oyster farmers are doing is a good thing, for the most part. But he says the coastal management council let it get out of hand when it agreed to allow five percent of each individual pond to be used to farm oysters.

Art Ganz, president of the Salt Pond Coalition, a group that wants to limit the proliferation of oyster farms in Rhode Island.

“Everybody needs to have a piece of Narragansett Bay or the coastal salt ponds for what they want to do,” he said. “They are heavily utilized by recreational people, tourists, boaters, kayakers and everything else. You put all those factors together and that five percent, really is a lot more in unit area than that little number of five percent.”

“Even though our oyster farmers are continuing the tradition of these marine-related industries, they seem to be more susceptible to the criticism and scrutiny of the upland landowner,” he said.

But, he said, the industry is continuing to grow. “I mean this year, our oyster production landed value exceeded our wild quahog harvest, in terms of value. So, it’s growing.”

He said oyster farming allows the state to maintain the marine industry along the coastline, a significant part of the Rhode Island economy and the state’s history.

Watch the whole process, from fishing to shipping:

Oyster Farming in Rhode Island from Marketplace on Vimeo.