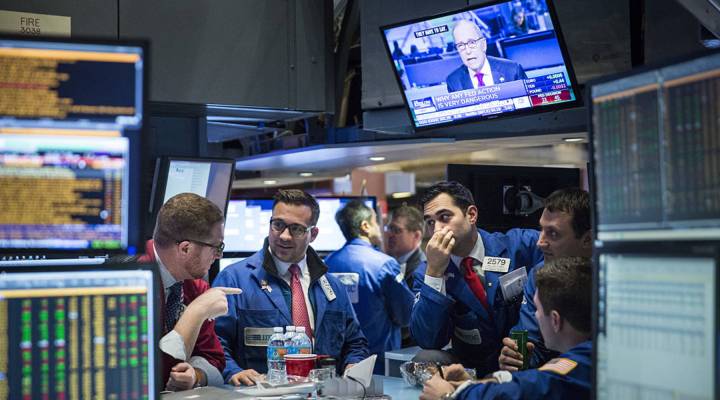 COPY
Traders on the floor of the New York Stock Exchange during the afternoon of January 27, 2016 in New York City.  Andrew Burton/Getty Images

Traders on the floor of the New York Stock Exchange during the afternoon of January 27, 2016 in New York City.  Andrew Burton/Getty Images
Listen Now

There’s been a big selloff worldwide in bond markets since the Fed’s decision yesterday to hike interest rates.

The yield on government bonds rose sharply in Germany, the U.K., Australia and Japan. In China bond futures fell so much exchange authorities halted trading of those securities. In fact, yields on long-term U.S. Treasuries have been rising ever since the November election. Economists say they’re rising in part due to anticipation of economic growth, and a possible economic stimulus package in the U.S. next year.

The Fed’s plans — it anticipates hiking interest rates a few more times next year — are designed to make sure the economy doesn’t overheat with labor shortages and runaway inflation. Higher rates may drive the U.S. dollar higher; that’s bad for domestic manufacturers trying to export. Industries like auto and housing that depend on cheap borrowing could face a slowdown too.

So, the days of low-interest fixed rate mortgages and zero percent on credit cards may be gone. That still doesn’t mean that credit will be expensive, it’ll just be a little bit more expensive than it was five years ago. However, the incremental effect of future Fed rate increases could add up quickly, particularly for borrowers in the sub-prime loan market who are already paying high interest rates.

Correction: A typo in the headline of this story was corrected on December 16, 2016.