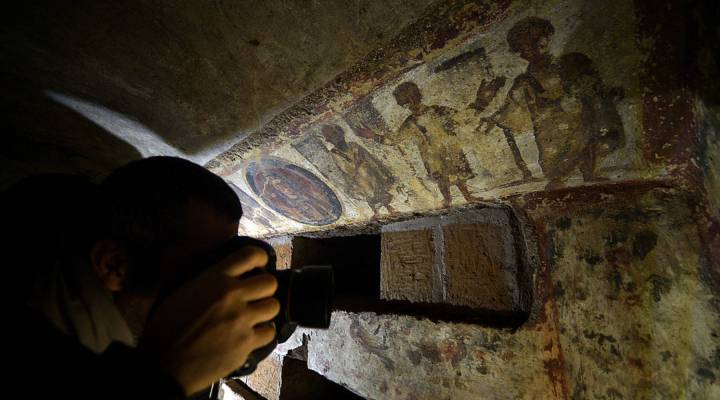 COPY
A photographer takes pictures of restored frescoes at the Saint Priscilla catacombs in Rome on November 19, 2013.    FILIPPO MONTEFORTE/AFP/Getty Images

Saving the banks is not the only rescue mission underway in Italy. The government has been battling to conserve an even richer collection of assets that are also crumbling: the country’s huge stock of architectural treasures. From the ancient ruins of Pompeii to the Renaissance churches of Florence, Italy has more UNESCO World Heritage sites than any other country. But mired in debt and with the economy in the doldrums, the government in Rome cannot, on its own, finance the daily upkeep of this vast property portfolio, let alone pay for its restoration. And so it has turned to the private sector, including Chinese corporations, for help.

A great deal of money is required.

In a dark and dusty tunnel under a small hill opposite the Colosseum, Claudio Parisi Presicce, Superintendent of Cultural Heritage for Rome, showed Marketplace one of the many thousands of artifacts in urgent need of protection: a fresco dating back to the 1st century A.D.

“Just breathing in the vicinity of this painting damages the pigments” Parisi Presicce said.  “It’s really, really fragile. Light and humidity will gradually erode the colors. It will require some very expensive equipment to control the environment in here to preserve that image.”

The painting, depicting a scene from an unknown city, is believed to have adorned a wall in the Emperor Nero’s magnificent palace, the Domus Aurea or Golden House.

Philip Ditchfield, a British archaeologist who has worked on excavations in Italy and Greece, and now lives in Rome, has no doubt that this fading picture is worth defending from further ravages.

“It’s an incredible archaeological find. It’s very rare where to find a site where you can say ‘this is a place where the Emperor actually walked, or gave a speech, or gave a poetry recital.’ It’s well worth getting the money together to conserve this.” he said.

The cash-strapped Italian government has appealed to the corporate world for help. Under a program called Art Bonus it has offered tax breaks to any company that foots the bill for restoration work. So far the scheme has raised about $140 million and among the landmarks that have been spruced up as a result are the Colosseum and the Trevi fountain.

The scheme has reaped rewards from foreign donors. A Japanese importer of Italian garments — Yuzo Yagi — donated more than $2 million to refurbish a pyramid outside Rome.

“He got so much from Italy, making a fortune selling Italian clothes in Japan, that he asked himself: ‘why don’t I just do something nice for this country which has given me a tremendous economic opportunity!”  said Daniel Berger, an art consultant with the Ministry of Culture in Rome.

The ministry has made overtures to China, inviting Chinese corporations to follow Mr. Yagi’s example. The Chinese have good economic reasons for doing so; they export more than $30 billion worth of goods a year to Italy and own more than 200 Italian companies including Pirelli the tire-maker and the AC Milan soccer club. But while the ministry salivates at the prospect of Chinese millions flooding into Italian conservation projects, Emanuele Montini of Italia Nostra – a conservation watchdog – is a little wary.

“We welcome any money from China but with conditions.” he told Marketplace.  “We don’t want to see our most precious landmarks plastered with billboards. Too much advertising is ugly, it’s ugly. It’s important that our monuments are respected.”

But Montini is realistic. Exclusive photo-shoots using the monuments are acceptable. After all, he says, Italy’s unparalleled architectural heritage is under threat: from tourism, smog, rain and earthquakes but “the biggest threat by far…is lack of money.”