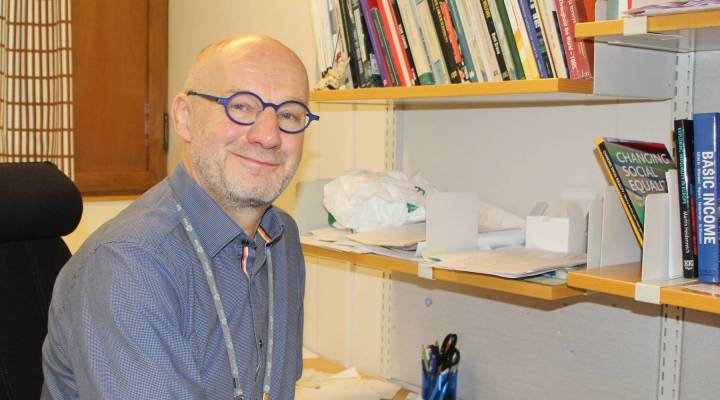 There’s been a lot of buzz this year about an old economic idea called universal basic income. It’s a guaranteed monthly check from the government for every citizen, no strings attached. Automation, gig jobs and the overall precariousness of work is driving interest in the idea, from Silicon Valley to the Netherlands. Finland launches a pilot program next month to test out the idea, but the country’s center right government is testing it as welfare reform, not as an anti-poverty tool.

Finland, population 5.5 million, is struggling with high unemployment, especially among the young. The jobless rate is more than 8 percent. Among young adults it’s 20 percent.The Nordic country’s export-driven economy has suffered, partly due to the decline of Nokia, the Finnish cellphone maker. Olli Kärkkäinen, an economist at Nordea in Helsinki, says long-term unemployment is growing.

“The main problem is young people who don’t get their first jobs after they graduate,” Kärkkäinen said. “Think about a young person who’s unemployed two to three years. That can have a devastating effect on their whole life.”

Finland’s center-right government, headed by Prime Minister Juha Sipilä,  wants to see if an unconditional basic income would encourage Finns to take low-paid or part-time jobs that don’t pay off for them under the country’s current welfare rules.

Mika Valtonen, 24, lives in Helsinki and has been unemployed for two years.

Right now many unemployed Finns are caught in “incentive traps,” where working leaves them worse off than staying on social assistance.

Mika Valtonen, 24, knows the problem well. Valtonen has a vocational education in computer tech. But since moving to Helsinki five years ago, he’s been in and out of jobs, on and off unemployment benefits and tangled with welfare bureaucrats over whether he met their job search requirements. What jobs he has found have been through temp agencies, mostly.

“If the company says, ‘We don’t want this person anymore,’ you’re out immediately, in one day,” Valtonen said.

Valtonen has earned a little money, off the books, DJ-ing and promoting Helsinki’s underground techno music scene. If he were to report the income to the government, he would lose welfare money.“If I don’t get like a real full-time job with a real salary that exceeds the 1,100 Euros I get at the moment, then I’m stuck at this situation,” he said.

Ollie Kangas, director of government and community relations at KELA, the government agency that handles all sorts of public benefits, He is leading the basic income experiment.

“In the present system they are a little bit afraid of accepting job offers, say, for two months or three months, because they think that, okay, how much would I benefit, in terms of money?” Kangas said. They are also nervous about re-qualifying for unemployment once a temporary job ends. “So they’re afraid of bureaucracy and they’re afraid of losing that income stream,” he said.

If all goes as planned, Finland will launch its two-year basic income pilot in January.  It’s not a test of universal basic income, where everyone gets a check, rich or poor. Instead, 2,000 unemployed Finns will get the equivalent of $600 a month. Unlike unemployment benefits, they won’t have to prove they’re searching for a job or lose any part of the basic income check if they get a job.

Olli Kärkkäinen, the Nordea economist, has criticized the pilot. He argues it doesn’t take away enough other subsidies from the unemployed to really test the work incentive, such as their housing allowance.  Plus, it doesn’t include the higher taxes needed if everyone in Finland were to receive a monthly check. “There are no losers in this experiment,” Kärkkäinen said. “The results are bound to be positive.”

Olli Kärkkäinen, an economist at Nordea, says Finland’s basic income pilot doesn’t reflect a realistic proposal for a  basic income in the country. He stands above the trading floor at Nordea in Helsinki.

It will, however, answer a very compelling question, he said.

“Now, unemployment benefits are conditional on you looking for work,” Kärkkäinen said. “With basic income, you get it even though you don’t look for work, if you stay at home, if you go to work some more. That’s a thing I’m looking forward to most. How making benefits unconditional will affect the choices people make.”

Right now Finland is one of the most generous welfare states in the world, with universal healthcare, free college, four months paid maternity leave and many other benefits. As seen in the chart below, government spending to GDP stood at around 58 percent in 2014. Spending on “social protection” like unemployment and old age pensions was around 25 percent. But the country’s population is aging and growth is sluggish. The government has started to cut back benefits and hopes a basic income could act in lieu of many benefits the poor currently get.

In Finland, government spending to GDP has averaged 49.94 percent, one of the highest rates in the world. That spending includes generous benefits for the unemployed.

Liberals in Finland, currently out of power, want to set a basic income at a much higher level than conservatives.  But even they can see advantages to streamlining the vast maze of Finland’s overlapping social benefits, especially for the poor who have to navigate it. Teivo Teivainen, a professor of political science at the University of Helsinki, said theoretically,  if an unconditional basic income replaced a handful of other benefits, “Your life would be clearly be less stressful and more free, in that sense.”

KELA’s Ollie Kangas said Finland strongly supports the idea of evidence-based policy. “It is better to experiment with a small group of people instead of making legislation for the whole country in case the legislation is bad,” Kangas said. “It’s easier to stop everything if it’s obvious it doesn’t work.”

Most Finns tell pollsters they support a universal basic income, but at 1,000 Euros a month, not 600, like in the pilot.  That’s about $1,055 a month, or $12,660 a year. When informed of the steep tax hikes required, however, they balk.  Apparently even the generous Finns have their limits.