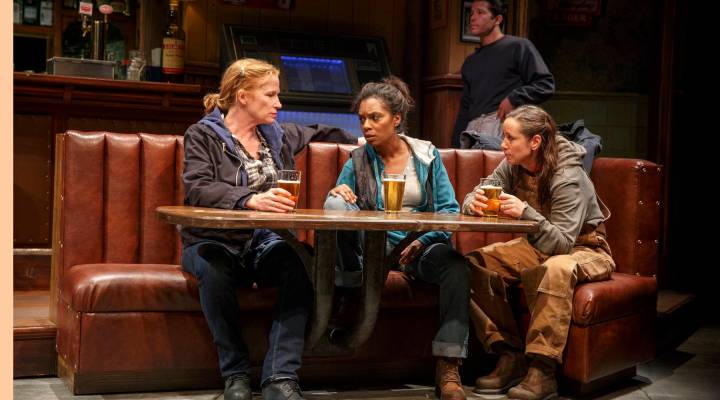 About a week before the election, my younger brother, who is a playwright, sent me an email titled “story idea.” It was about a play called “Sweat,” by Lynn Nottage, one of his former professors. “It’s all about the economy and real lives in Reading, PA. Set in a bar. Lynn spent a lot of time there.”

As the obnoxious big sister I am, I informed him that I was very busy and focused on the election. “Yeah,” he said. “This play is about is everything the election is about.”

And he was right. “Sweat” is a remarkable piece of theater, and Nottage, who has won both a Pulitzer Prize and a MacArthur “genius” grant, is an unparalleled storyteller.

Johanna Day and Carlo Albán in “Sweat”, written by Lynn Nottage and directed by Kate Whoriskey, running at The Public Theater.

“Sweat” largely takes place in a bar, where a group of workers from a nearby plant go to unwind. The timeline alternates between 2000 and 2008, and we see jobs lost and gained, a lockout by plant management, and hear a series of conversations-slash-confessions with the bartender, Stan. It’s a story about workers, but one where the people feel, well, like people. Not thin cardboard versions thereof.

Nottage spent essentially two years researching Reading and talking to the people there. Yes, “Sweat” wrestles with de-industrialization, the decline of a plant, and the fate of the working class. But it’s really about what happens between people when the economic rug is pulled out from under them. The characters’ relationships? fracture along racial and ethnic lines, friendships unravel, addictions form, and families are ripped apart. “The people sometimes who are closest to us,” Nottage said, “are the ones who bear the brunt of our frustration.”

A man waits for a bus downtown on October 20, 2011 in Reading, Pennsylvania. Reading, a city that once boasted numerous industries and the nation’s largest railroad company. “Sweat” addresses not just the economic troubles in Reading, but also their effect on personal relationships.

It is both a profoundly wrenching piece of work, and one that is ultimately hopeful about the future of the country. I walked out of it reminded that there are stories art can tell that journalism – no matter how good – simply can’t.

This week I sat down with Nottage at the Public Theater here in New York. She’d just gotten the news that “Sweat” will move to Broadway. We talked about the show, the responsibility of artists to wrestle with big social questions, and the role of women on Broadway.

Though the show has been called a “predictor” of Donald Trump’s win, Nottage said “I think the play really is about where America is now, where America was 20 years ago, where America hopefully won’t be in 20 more years.”

“Sweat” is running at the Public Theater in New York City through December 18, 2016. The play opens on Broadway in March 2017. 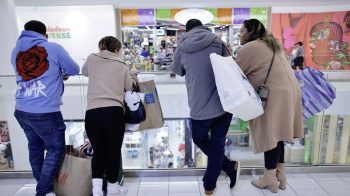