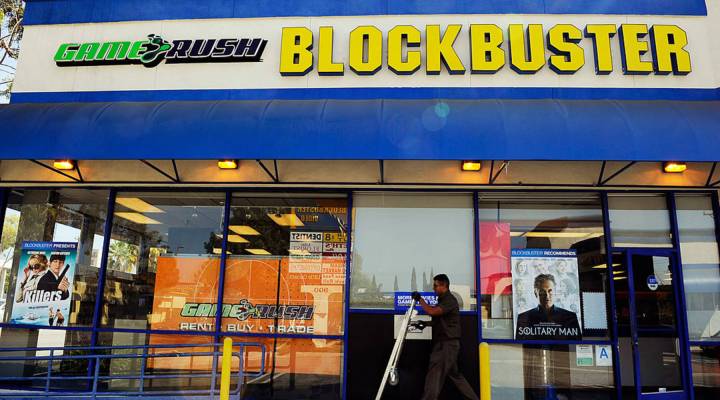 COPY
A UPS driver makes a delivery at Blockbuster store on September 23, 2010 in Glendale, California. That year, the video-rental business filed for Chapter 11 bankruptcy, facing rigorous competition and reportedly more than $1 billion in debt. But in a thriving nostalgia market, many stores like Blockbuster may see an unexpected resurgence. Kevork Djansezian/Getty Images

A UPS driver makes a delivery at Blockbuster store on September 23, 2010 in Glendale, California. That year, the video-rental business filed for Chapter 11 bankruptcy, facing rigorous competition and reportedly more than $1 billion in debt. But in a thriving nostalgia market, many stores like Blockbuster may see an unexpected resurgence. Kevork Djansezian/Getty Images
Listen Now

Since the dawn of the new millennium, there is a ton of technology that has been rendered obsolete. Remember cassette tapes, floppy disks, and the Walkman? Today, they’re all pretty much useless.  But, there is a thriving nostalgia market, and one of the holdouts that it’s fueling may surprise you: the video store.

Believe it or not, video stores are still out there. Both owners and customers say that the stores offer a variety of films that cannot be found elsewhere.

Erin Geiger Smith is a contributor to the Wall Street Journal, and recently wrote about video store holdouts.

On who the modern video store customer is:

You know, we try to avoid using the word hipster anymore, but it’s people who like things local.  The man in Austin,  Bryan Connolly of Vulcan Video there said people in Austin really care about shopping local. They want local food, they want local everything. And for them, that trickles down to including supporting the local video store.

Geiger Smith on the strength of the video store market:

Some are doing better than others, but it’s definitely a tough market, you’re not gonna see these guys opening 8 new stores anytime soon. But, one opened in 2015 in Philadelphia. It was a gentleman who had worked at a store that closed, but thought he could do better opening a smaller store and combining it with a coffee shop. So he didn’t just open a video store, he knew that that wasn’t viable, but by combining the two he sort of found a market there that works for him.