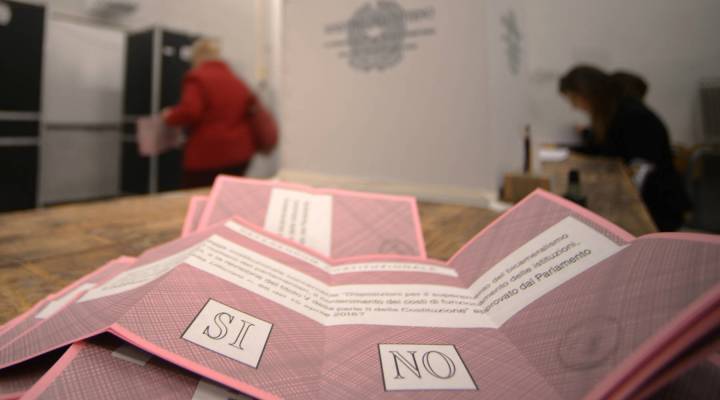 COPY
A view of a polling station in Italy during the country's referendum on constitutional reforms. FILIPPO MONTEFORTE/AFP/Getty Images

A view of a polling station in Italy during the country's referendum on constitutional reforms. FILIPPO MONTEFORTE/AFP/Getty Images
Listen Now

Italian voters have defeated a referendum on constitutional reform by a wider than expected margin — 59 percent of them said “no.” Italian prime minister Matteo Renzi plans to resign, with new elections likely to begin by early spring, if not earlier.

This is a political story of voters rejecting their elites, with parallels to the Brexit referendum. But it’s also a financial story, with an outcome that could affect plans to prop up Italy’s third largest bank: Monte dei Paschi di Siena.

Marketplace’s Stephen Beard joined us to talk about the vote’s implications.

On why this is connected to the Italian banking system:

The Italian banks are among the most fragile in Europe. Eighteen percent of their loans are nonperforming. Some seven of them are in big trouble. The world’s oldest bank, Monte dei Paschi, is in the middle of a 5 billion euro refinancing operation. This referendum result will frighten off many investors. It is possible some of the banks will actually have to go to the government and beg for a bailout, which the interim caretaker government will certainly be tempted to provide, because they won’t want to make the banks’ small investors — the small bondholders — suffer. And that could bring it into conflict with the European Union, which has effectively banned bailouts.