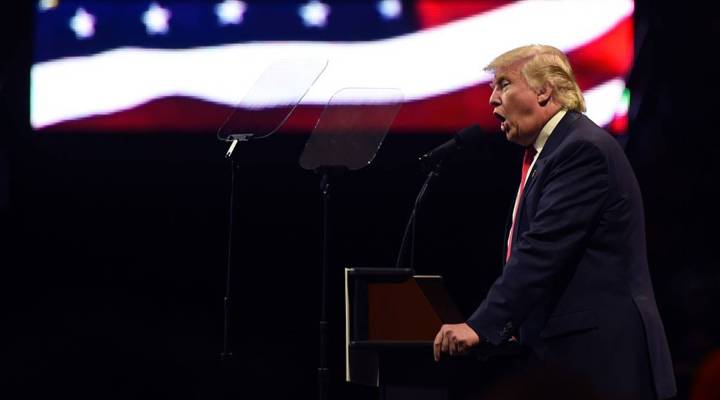 COPY
US President-elect Donald Trump speaks during the USA Thank You Tour at the US Bank Arena in Cincinnati, Ohio on December 1, 2016.  TIMOTHY A. CLARY/AFP/Getty Images

US President-elect Donald Trump speaks during the USA Thank You Tour at the US Bank Arena in Cincinnati, Ohio on December 1, 2016.  TIMOTHY A. CLARY/AFP/Getty Images
Listen Now

President-elect Donald Trump has made many promises about what he’ll do once he’s president when it comes to trade.  He’s doubled down on some of them — for example over the weekend he tweeted that companies that move production out of the U.S. could face a 35 percent tax on the things they want to sell here. But what can a president actually do?

For example, Trump has talked about renegotiating The North American Free Trade Agreement (NAFTA). Could he do that without Congress?

“The president has the authority to withdraw and the president could certainly seek to renegotiate the terms,” said Miriam Sapiro, a partner at Finsbury and former deputy U.S. trade representative.

But, that might not be sustained by U.S. courts or the World Trade Organization.

But what about singling out U.S. companies that move production elsewhere? “There is no provision in U.S. law that allows the Department of Commerce to selectively apply duties in this manner,” said Richard Weiner, a partner at the international trade law firm Sidley Austin.

However, Rachel Brewster, who teaches trade law at Duke University, said a president could accuse individual companies of trying to “dump” their goods — that is, sell them at very cheap prices to try and kill off competitors — and then levy a high tax on those goods. “You can very easily use the tools the president has to coerce certain high-profile corporations into making concessions,” she said. It wouldn’t be workable as a strategy against all companies that offshore — there are too many — but Brewster said  this strategy could be used to make an example of some.