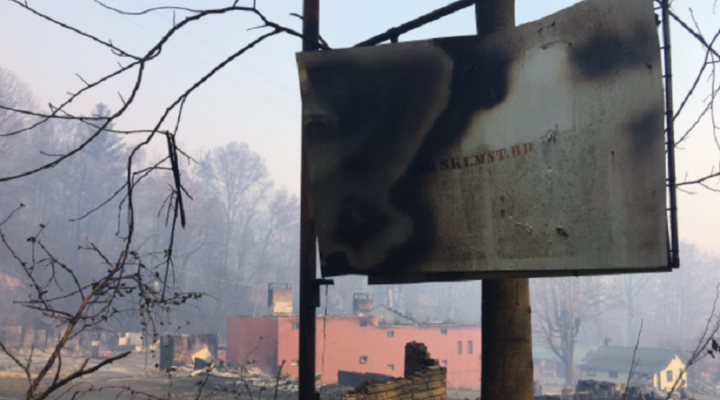 COPY
A burned sign and structures in Gatlinburg. Mark Nagi./Tennessee Department of Transportatoin

The resort towns of Gatlinburg and Pigeon Forge, Tenn. are trying to come to terms with the loss of life and property from the wildfires that swept through the community this week. At least 11 people died and 700 buildings were destroyed.

But many people who lost their homes and businesses don’t even know it yet, because they’re still waiting to be allowed back into their neighborhoods.

James Tweedle and his wife were among the 200 people who spent Wednesday at a sports complex-turned-temporary shelter here in Gatlinburg. The wildfire is about the scariest thing he’s ever experienced.

“You could feel the heat and ash,” he said. “The best way to describe it is like you were at the gates of hell.”

Gatlinburg and Pigeon Forge sit right at the entryway to Great Smoky Mountains National Park, with a combined year-round population of about 10,000. Much of the area wasn’t touched by fire, and a lot of people got to go home. But those who remain in the shelters, like the Tweedles, are still under strict evacuation orders.

They can’t confirm whether their home is still there. Neither can Terrylynn Battson, who evacuated with her elderly mother.

“I do not know if my house is still standing,” said Battson. “I live a mile from here. It’s very frustrating.”

By Wednesday night, about 200 people were staying in shelters in the area like this one, down from more than 1,000 Monday night.

This is a common refrain: the palpable uncertainty of what people will still have when they return.

And it’s not just homes. It’s places of employment. In the case of Billy Stinnett, it’s the vacation rental cabins he manages for Jackson Mountain Homes.

“Right now, we’ve confirmed 13 of our properties that have burned, but anything past this way we haven’t been able to get to at this time,” he said.

About a third of his company’s properties are in the area that’s still off limits. So they’ve spent most of the week just trying to confirm that their guests who stayed there were able to get out.

And then there are those who know that their homes burned to the ground.

“Yeah, I got confirmation from a cell phone picture — my house is gone,” said Anthony Reynolds. “We got out with what we got on.”

Reynolds is staying in the shelter with his wife, daughter and grandchildren. He said he hadn’t expected the fire to jump to his side of the mountain. But the winds shifted and it set a path toward his house.

In addition to his house, he knows the hotel his wife works at was badly damaged.

“Everybody here’s in the same situation. They’ve either lost your home, lost your job or lost both,” he said.