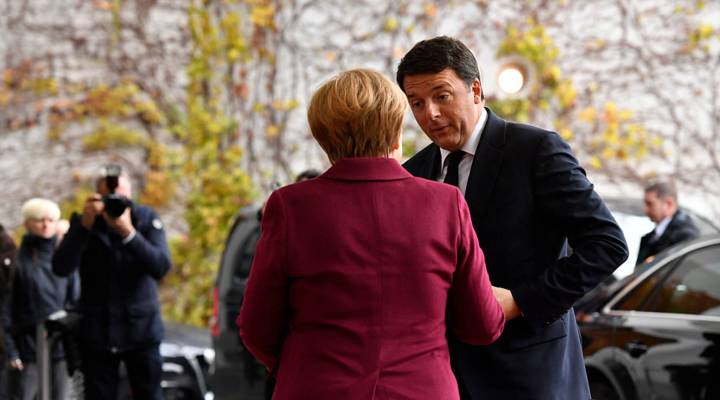 First it was Brexit. Then Donald Trump’s presidential election victory. Where will the next politico-economic bombshell fall? It could be in Italy over the weekend. On Sunday, Italians vote in a referendum on constitutional reform. And the result could — conceivably — produce turmoil in financial markets.

Prime Minister Matteo Renzi called the referendum to streamline the machinery of government in order to push through more much-needed economic reform to tackle the country’s chronically low growth and stratospheric joblessness. 37 percent of Italy’s young people are unemployed, output is down 9 percent since 2008 and industrial production has shrunk by a quarter. Many business people back the “Yes” campaign in Sunday’s referendum.

“I will vote yes.  I don’t think it’s good to stop the reform. Because things are very slow, very bureaucratic and not very productive in this country,”  said carpenter Pierluigi Cosatti, who makes furniture and shop fittings at his workshop on the outskirts of Rome.

Insurance broker Andrea di Giacomo, speaking in his offices in the center of the city,  made the same complaint. He calls Italy’s public sector bloated and indolent.

“These public servants…they walk. We run. We as private business people try to run but they walk,” di Giacomo said. “How will I vote on Sunday ? Yes! Yes! And Yes again!”

But a majority of  Italians may vote “ no.” Prime Minister Renzi has made the referendum a matter of his own political survival; he’s promised to quit if the vote  goes against him. That has allowed populist opposition parties to portray  the referendum as an opportunity to give an unpopular government a good kicking. The Five Star Movement — led by comedian Beppe Grillo—has fully exploited this opportunity and has campaigned vigorously against Renzi’s constitutional reforms. Five Star is anti-corruption, anti-austerity, anti-euro and, above all, anti-establishment. One of the party’s lawmakers, Manlio di Stefano, thinks that after Brexit and Trump’s election win, the “no” voters have a good chance of victory.

“If there’s some connection between everything that’s going on in the world from Trump to Brexit to the Italian Referendum, it is that nobody’s listening to the people’s voice and we need to  listen to people,” di Stefano said.

Di Stefano says if there’s a “no” vote, Renzi resigns, the government falls and Five Star takes power, it will hold another referendum on whether Italy should pull out of the euro. He describes the decision to take Italy into the eurozone without the people’s consent as a “ big error.”

“We just want to bring back power to the people,” di Stefano said.

If the euro’s third biggest economy did pull out of the single currency, it could easily crash the whole system. Financial mayhem could be the ultimate consequence of people voting “no” in this weekend’s referendum. Michel Martone — a former deputy labor minister — says the “no” voters, ironically, are motivated by fear.

But this is Italy, a country which has had 65 governments since World War 2, and has coped with political turmoil and uncertainty for decades. A “no” vote in Sunday’s referendum might briefly roil financial markets, but most analysts say in the medium term, it is more likely to cause drift and stagnation.