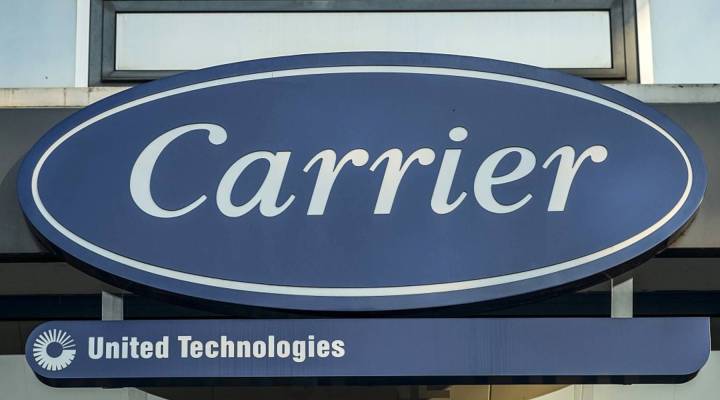 COPY
A picture taken on November 6, 2014 shows the logo of the heating, air conditioning and ventilation Carrier factory at the entrance in Montluel, eastern France.    JEAN-PHILIPPE KSIAZEK/AFP/Getty Images

A picture taken on November 6, 2014 shows the logo of the heating, air conditioning and ventilation Carrier factory at the entrance in Montluel, eastern France.    JEAN-PHILIPPE KSIAZEK/AFP/Getty Images
Listen Now

News that a heating and air conditioning equipment manufacturer called Carrier was canceling plans to move some of its production from Indiana to Mexico made national headlines last night. That’s because the deal was reportedly brokered by the incoming Trump administration. James Briggs is a business reporter and columnist at the Indianapolis Star and wrote about the deal.

There are a lot of unknowns:

The company so far has said nothing other than confirming that there is an agreement in place and that it will save close to 1,000 jobs. The union president so far has said that he’s not been involved in any of these talks. He doesn’t know much about the negotiations or what this deal will mean. He doesn’t know if the company is going to ask for concessions such as pay cuts from the workers. So there really is not a lot of information for the union president and the officials or the actual workers who are still waiting to find out what this agreement will mean for them.

Here’s the bigger picture for Indiana:

Indiana is still one of the biggest manufacturing states in the country. But these jobs, just like everywhere else, [are] angered. Manufacturing in general has been getting a lot more efficient, which has been leading to job loss. Now, the economy in Indiana is actually quite healthy. The unemployment rate has been hovering around 4.5 percent…so there are jobs to be found, it’s not actually that hard to find a job in the Indianapolis area, but a lot of the jobs that have been coming here are distribution jobs, things like working at Amazon, working for UPS or FedEx and those are jobs that pay like $12 to $15 an hour, so it’s a big pay cut.

This deal won’t save all the manufacturing jobs leaving the state:

Rexnord is another manufacturer that announced just a few weeks ago that it also will be closing its plant and moving jobs to Mexico. Those are 300 jobs there and those are probably workers wondering where their deal is today. This really was a targeted agreement for one specific factory of one specific company but it doesn’t really do anything for the broader manufacturing sector which is still bleeding jobs, not only in Indiana but across the U.S. so I think that shows the weakness of this approach of offering incentives on a company by company basis.