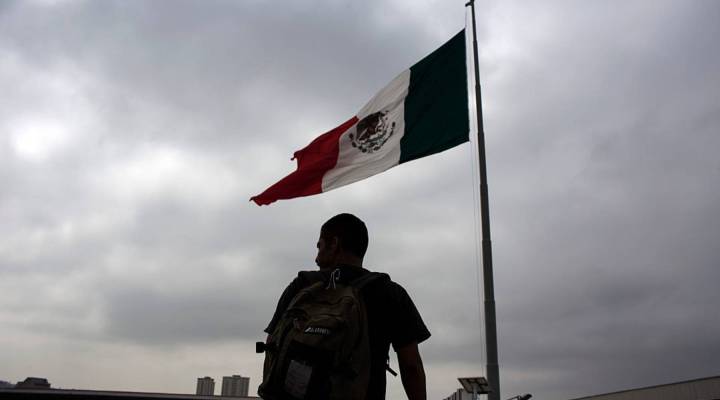 COPY
A Mexican immigrant who was deported from the U.S. is seen next to a Mexican national flag at El Chaparral repatriation center in Tijuana, northwestern Mexico on July 1, 2016. GUILLERMO ARIAS/AFP/Getty Images

A Mexican immigrant who was deported from the U.S. is seen next to a Mexican national flag at El Chaparral repatriation center in Tijuana, northwestern Mexico on July 1, 2016. GUILLERMO ARIAS/AFP/Getty Images
Listen Now

Isela Montalban is from Tepic, Mexico, and she moved to Germany to study for her masters and then put down roots because of the quality of life, the higher salaries and benefits like sick and maternity leave.

“What I find here is always there is this balance with the family and work,” Montalban said “For Germans it is really important” “

Montalban, who works for an international logistics company in Munich,  said she looked at going to the U.S. to expand her career horizons, but Mexican friends talked her out of it. “I have heard that a lot of people that went to the U.S.A.” Montalban said.  “For me it is a country it has many troubles.”

Mexicans crossing the border to live and work in the United States have been part of one of the largest migrations in modern history. But recently, there’s been a reversal of that flow. In November 2015 the Pew Research Center reported more Mexicans are leaving the U.S. than coming in. According to the Institute of Mexicans abroad, an increasing number of Mexicans are heading to Europe and Canada.

Institute of Mexicans Abroad data show over the past four years the number of Mexican nationals in Canada has more than doubled from around 50,000 to more than 100,000. That kind of growth is also true in some European countries.

“I get about five to 10 inquiries from Mexican people every day,” said  Laura Morales,  an immigration agent based in London. She struck out on her own four years ago, starting a company catering exclusively to Spanish speakers trying to move to England.

“I realized there was a need for legal advice out there and that is how I started working with Mexican people,” she said.

Morales said a lot of her clients have been in the U.S. previously. Many are college educated, highly compensated professionals and have passed English tests. But Morales said while interest is increasing among those looking at England, U.K. immigration policies are only getting more stringent.