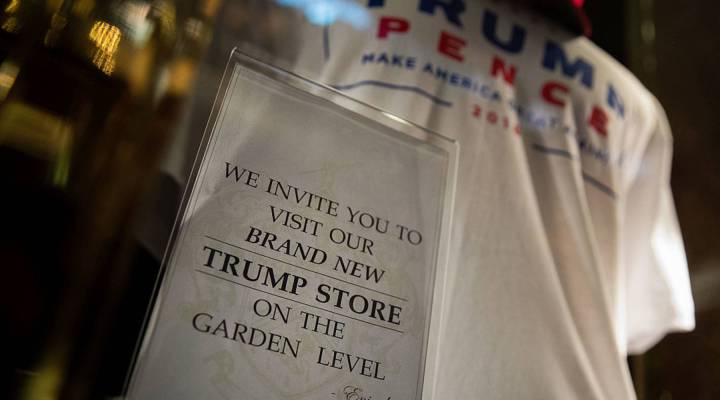 COPY
A sign advertising a new 'Trump Store' is display with merchandise at Trump Tower, November 16, 2016 in New York City. Trump is in the process of choosing his presidential cabinet as he transitions from a candidate to the president-elect.    Drew Angerer/Getty Images

A sign advertising a new 'Trump Store' is display with merchandise at Trump Tower, November 16, 2016 in New York City. Trump is in the process of choosing his presidential cabinet as he transitions from a candidate to the president-elect.    Drew Angerer/Getty Images
Listen Now

There’s a lot we don’t know about the future of the economy — and the Trump empire — Donald Trump administration,

We don’t know what Trump’s business holdings are, because he has not released his tax returns. But it is clear that there are many potential conflicts of interest between his businesses and role as president.

Trump has said he will put his interests in a blind trust, but then that his children will oversee his businesses, making them not a blind trust.

Since the election, he has named his three oldest children to his transition team, met with developers from a project in India and had his daughter Ivanka accompany him in a meeting with Japanese prime minister Shinzo Abe.

To dig into what the law says about how Trump should handle his businesses, Marketplace Weekend spoke to Ken Gross, who leads the political law practice at the firm Skadden.