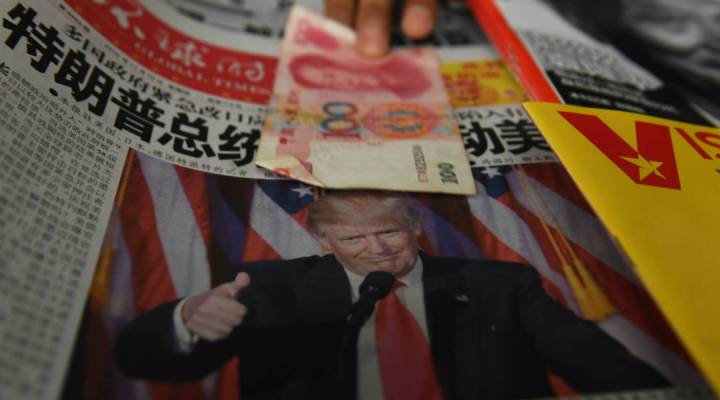 COPY
A vendor picks up a 100 yuan note above a newspaper featuring a photo of President-elect Donald Trump at a newsstand in Beijing. GREG BAKER/AFP/Getty Images

A vendor picks up a 100 yuan note above a newspaper featuring a photo of President-elect Donald Trump at a newsstand in Beijing. GREG BAKER/AFP/Getty Images
Listen Now

President-elect Donald Trump talked tough on China throughout his campaign, calling the country a currency manipulator and vowing to slap tariffs on Chinese exports. Now a congressional commission has a new report urging greater scrutiny of Chinese investments in the U.S.

Its recommendations are nonbinding. But the U.S.-China Economic and Security Review Commission warns that Chinese firms’ investments in the U.S. could give Beijing access to technology, intelligence and market power, threatening U.S. national security. It wants a key government body to be authorized to bar Chinese state-owned enterprises from acquiring or gaining effective control of U.S companies.

Critics say such fears about Chinese investment in the U.S. overlook the economic benefits, including tens of thousands of jobs.