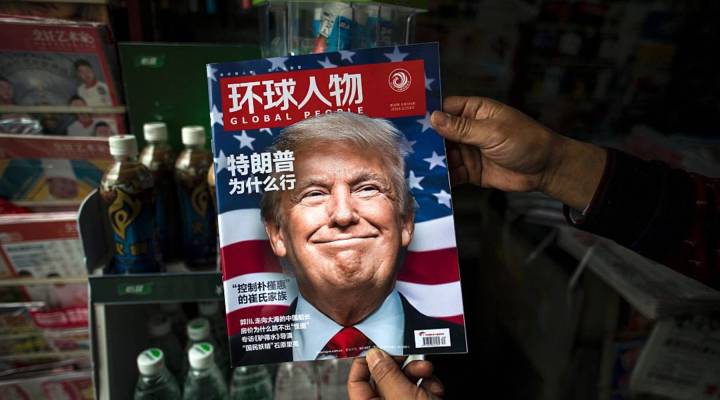 COPY
A copy of the local Chinese magazine Global People in Shanghai on Monday. Its cover story translates to "Why did Trump win?" JOHANNES EISELE/AFP/Getty Images

A copy of the local Chinese magazine Global People in Shanghai on Monday. Its cover story translates to "Why did Trump win?" JOHANNES EISELE/AFP/Getty Images
Listen Now

The United States and China have had a peaceful but strained relationship for many years, maintained primarily by trade deals and diplomacy between the two countries. President-elect Donald Trump has been very critical of China throughout his campaign, and many are wondering where U.S-China relations will end up under his presidency.

Jim Fallows, national correspondent for The Atlantic, believes that China should be on the future president’s list of priorities. He wrote about why that is in his latest article, “China’s Great Leap Backward.”

The breakthrough that Richard Nixon and Chairman Mao established, and that I would argue every American president from Richard Nixon through, crucially, Barack Obama maintained was the idea, No. 1: that it was better for both countries if they could work as difficult partners, rather than being enemies or adversaries. No. 2: that it was better for the United States, and this was an important point, if China grew and prospered rather than if it stagnated because whatever problems a prospering China created for the world, a stagnated, fractious, falling apart China would create worse problems. And No. 3: there would still be disagreements, but over time, the American assumption was, those disagreements would become more manageable. Not that China would become democratic, but that it would become, sort of, more internationalized in part of the world’s sphere.

On whether the United States and China have similar economies:

Yes, and the differences between China and the United States — we could spend the next 10 hours talking about, but, you know, No. 1, in economic integration, it’s almost impossible to find any company in America- in the United States, large or small, that doesn’t have an important relationship with China. It could be its supply chain, it could be its markets. It could be the way that non-commercial enterprises, like universities, are increasingly reliant on Chinese students as part of their population base, their student base, but also part of their international role in the world. The same thing is true in a different way in China, where its connection with the world economy through the United States has been a very important part of its rise out of poverty of the last 40 years or so. And in surprisingly broad realms of international cooperation, the United States and China have done things together that make a big difference. Certainly the most important is climate issues, where if the United States and China, the two major emitters in the world, don’t solve this problem together, there is no hope for anybody.

On Trump’s positions toward China:

I think this will be example No. 1, or, you know, No. 10,000 of what we learn or what we can expect from a Donald Trump presidency, related to the way candidate Donald Trump campaigned. Because the things Donald Trump said during the campaign were inflammatory and often grossly misinformed. For example, one of his standard lines in his campaign speeches was that China was artificially holding down the value of its currency. I mean, certainly China manages its currency, but recently it’s been holding it up — you know, the opposite of what Trump has said. So, we will now see, based on the phone call that Xi Jinping and Donald Trump have apparently had, what the path forward is.