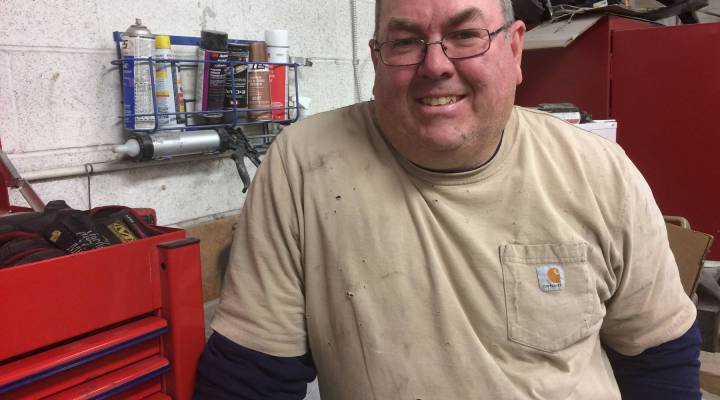 In Alabama, also known as the “Heart of Dixie,” Donald Trump took 63 percent of the vote — 1.3 million people. That’s the largest victory margin in a presidential race in Alabama in 44 years. Only  four other states showed stronger support for Trump on Election Day.

Mark Pearson is one of the Alabamans who voted for Trump. He’s worked two jobs for the last 22 years. He commutes more than 60 miles a day from Blount County, north of Birmingham. He’s a firefighter full time and he works at a body shop part time. Between the two jobs, he puts in 70 to 75 hours a week. His wife currently doesn’t work, and as with the family he grew up in, he said she shouldn’t have to.

Pearson got into auto body work when he was in high school and he wanted to paint his own car. He got a job at a shop.

He didn’t get out of the business. But he did take his firefighter test for a job that today gives him and his wife health benefits. At 51, these two jobs wear on him.

“I can’t work like I was 30,” he said. “I can’t work like a 24-year-old. I’m getting older. I feel it every morning when I get out of bed. Those knees, you feel those knees every time you get up out of the recliner, it’s like, ugh.”

He said he’s at the age when he and his wife will need to go to the doctor more. He needs health insurance. Premiums have been rising — he pays $400 a month.

“Last I don’t know how many years it keeps going up and up and up and up,” he said. “And it’s not changing unless we get people in there who say we’ve got to make a difference for everybody else.”

Trump, Pearson said, is the person to lead that charge. He doesn’t want Trump to repeal the Affordable Care Act, just to tweak it so that health care is more affordable for younger people who don’t visit the doctor very often and for small businesses, like the body shop where he works. As it stands, health care is so expensive that employers either have to keep a stable of part-timers without benefits or pass those high costs onto employees.

“They can’t afford to pay their employees a little bit more because margins are just cut so tight that I think he could, he’s probably got some ideas on how to do that, because he’s done it for years,” Pearson said. “He’s built an empire, which is no small task.”

Jill Leath owns Faith Consignments in Alabaster, a city about 30 miles south of Birmingham. Leath’s shop is on a busy strip with plenty of pawn shops, check cashing places and mobile home sales lots. She voted for Trump because she believes he’ll make the economy stronger.

“I have noticed within the last four years that sales have been down a lot, and I just feel like people are just scared to spend money,” she said. She senses people are spending more on things like health care, so they’re shopping less. “Everything is all just bunching up on everybody,” she said, “even me.”

Four years ago, she had five employees. Today she has one: her mother, whom she hired part time so that she’d have an income.

“Just with the economy and the slowing down of business, I have not been able to afford to keep certain employees on,” she said.

If Trump fulfills his promise to help small businesses and stabilize the economy, she said, it’ll be more money in everyone’s pocket.