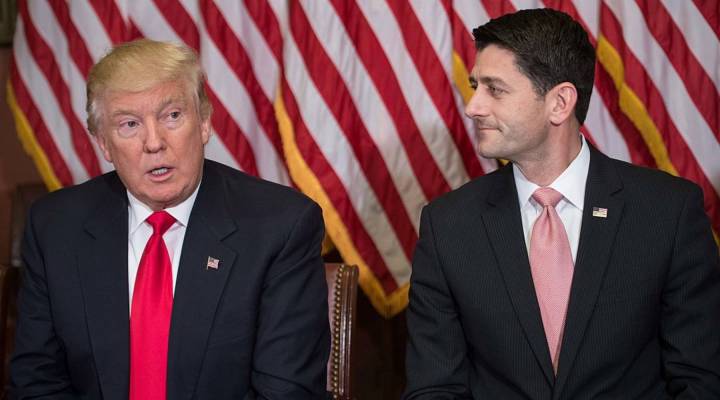 With the presidential race finally over, a new race has begun to hand over control of the entire federal government from one administration to the next.

That translates into thousands of political appointees and many more jobs beyond that. But, given that Donald Trump has said repeatedly that he wants to “drain the swamp” in Washington, that could mean significant changes for certain agencies.

Out on the campaign trail, Trump didn’t parse words about which federal agencies he wanted to reduce or even close entirely.

It was comments like these that were fresh on the minds of Department of Education employees when they woke up on Wednesday morning, wondering if their jobs might soon vanish.

“How we felt coming to work after that … people were shocked, everybody was shocked,” said Jacob McKenzie, who works at the Department of Education. He said it isn’t just his job that he’s worried about, but the students and kids whom the Education Department serves.

“It’s very early to tell,” he said, “but it’s kind of like this guy has no idea what he’s doing, and we have to sit on the sideline and watch our children’s future go down the drain.”

The Department of Education isn’t the only agency to be singled out by Trump for cuts. The Environmental Protection Agency has been a thorn in the side of the GOP for a long time.

“We’re going to save on Department of Environmental Protection, because they’re not doing it. They’re not doing their job, and they’re making it impossible for our country to compete,” Trump said, speaking at a campaign stop in New Hampshire.

Under President Barack Obama, working to fight climate change was a driving mission of the EPA. Trump, on the other hand, is said to be considering someone from the fossil fuel industry to lead the agency.

Tom Reynolds was a senior staffer at the EPA and later served as an adviser to the Obama White House on climate change.

“I think people are going to think long and hard about whether they want to be part of that,” Reynolds said.

But, campaign rhetoric aside, is it really possible to gut an entire federal agency? Can a president just do that?

“The president appoints a cabinet that reflects his priorities and carries out his marching orders.”

In the weeks and months to come, Trump’s transitional team will come up with a short list of names for top cabinet positions as well as some 4,000 political appointees.

“Transitions are interesting because they do give an indication of how someone is going to govern,” Jeff Navin said.

Navin was a former chief of staff in the Department of Energy under Obama. Like the EPA, Navin said the energy department will also likely see a big culture change under Trump.

Still, most career bureaucrats are used to these kinds of power shifts.

“You know there are people who are all in on the Trump agenda and there were people who woke up the day after the election and thought, ‘That’s not what I was hoping the outcome would be.’ But they all know what they’re signing up for when they take those jobs,” Navin said.

However Washington feels about Trump, Mark Dubowitz, of the national security think tank the Foundation for Defense of Democracies, said the business of the country can’t wait.

“Oh, timing is of the essence. There is a very short window of transition,” Dubowitz said.

For starters, there is a long list of international crises besetting the U.S.

“For that reason, you’ll see national security professionals for the GOP, for the most part, putting aside some of the concerns they have and really stepping up for the good of the country,” he said.

Meanwhile, the list of names being tossed around for key posts in Trump’s cabinet is providing Washington with one of its favorite diversions — endless rounds of speculation about who will get those top jobs.