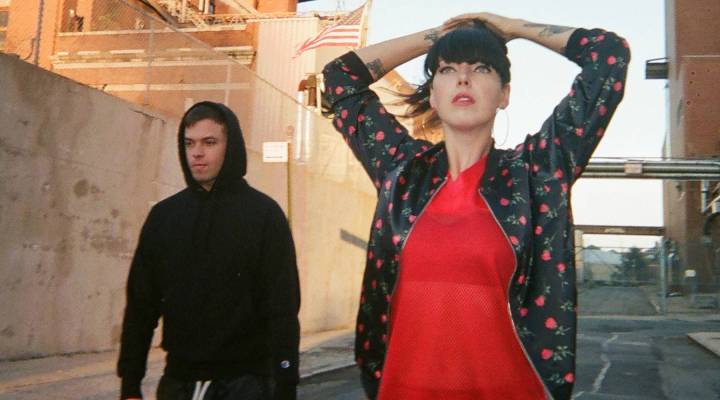 No matter who you are, you’ve probably had a rough day at the office that changed your perspective, or maybe you made an impulse purchase you really, really wish you could take back. This week, Alexis Krauss and Derek Miller from the band Sleigh Bells took our money-inspired personality questionnaire.

D: What is something you bought that you now completely regret buying?

A: I tend to buy clothes that I never wear.

D: So you’re just in the nude?

A: Right, constantly. No, but I actually have this one very vivid memory. I don’t think it was purchased with my own money because I was probably about 9, but do you remember moon shoes? They were like the spring, trampoline [shoes.]

D: Those were terrible.

A: I vividly remember having those and thinking they were awful and realizing it was a very poor purchase on behalf of myself and my parents.

D: I want to apologize to Moon Shoes, Inc.

A: They didn’t work!

D: Are they still in business?

A: Probably not. They were terrible, so don’t buy Moon Shoes.

A: What was your first job?

D: I was a bag boy, a grocery dude at Publix Supermarkets. I held that job for about six weeks. Within three days I knew who the good tippers were, and I’d kind of bully my way into [the good lanes]. I’d see a lady pull up to the register with two carts, and there’d be somebody else there to bag, and I’d be, like, “Get out of here.”

D: I feel ashamed to admit that right now. That’s a good thing that I feel guilty about that, at least. I got fired because I joined a hardcore band and didn’t show up. Anyway, Publix, thank you.

A: That’s a quality grocery store right there.

D: Do you remember the first time you were paid to perform? That must have been a long time ago, like way [before] Sleigh Bells.

A: Yeah. It depends on what kind of performance. I was in a Nickelodeon Magazine commercial and I winked at the camera. So if that counts as a performance, then I was about 10 years old. It was really hard to do.

D: And that’s on the internet as well. So please look [at it].

A: Thank you internet.

A: In a next life what would your career be?

D: Head coach of an NBA game, without question.

A: You’d make a great coach.

D: Thank you. I’d like to think so. I like to encourage people, and I don’t necessarily need the spotlight. Actually, I prefer not to be in it at all. So yeah, I’d want to coach the Miami Heat.

A: And you’d have, like, good coach dances that’d get your team really excited.

D: I have a really good coach dance whatever that is. I don’t know. I don’t think I’d have a dance. Pat Riley doesn’t have a dance.

D: What is your most prized possession?

A: If creatures with beating hearts are considered possessions, which I think they are because I did purchase her, it would be my dog. My bull terrier. She’s the love of my life.

D: She’s a special creature, she comes on tour with us.

A: But if it wasn’t a dog, it’d probably be my milk foamer.

A: My latte foamer. I just love that thing so much.

D: I was trying to imagine what a milk foamer was, because I don’t drink coffee.

A: I brought it on the tour bus, I love it that much.

A: What is something everyone should own no matter the cost?

A: Probably a good pair of headphones, that’s what I would think you would say.

A: You’re such an audiophile, [but] no, you’re gonna go with Band-Aids?

D: Yeah. I was going to try to say something sarcastic but no, I mean, if you cut your arm open or stub your toe [and] you’ve got a Band-Aid, you’re good.

A: Yeah, well, Band-Aids are notoriously extremely expensive, so it’s an investment.

D: Not everybody has five bucks sitting around, you know. I’m serious.

D: What advice do you wish somebody gave you before you started your career?

A: I guess for me it always comes back to self-confidence and standing up for myself and just not taking criticism that was unsolicited or came from the press too seriously. I don’t want to say that I was damaged by anything in the beginning, but I think that hit me hard and was overwhelming at first. I developed a much thicker skin and [have] become a much more confident, self-assured person. I think being a little tougher about things like that.

D: I probably should have just taken much better care of myself for the first couple of years. I was going to say that I think I probably got that advice a lot, but probably ignored it. Yeah, I wish I had taken that advice, but I’m cool.