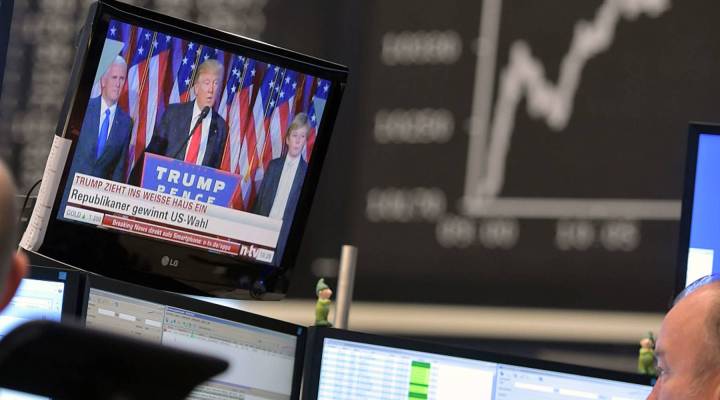 COPY
Donald Trump is seen on a TV screen below the graph showing the day's course of the DAX at the Frankfurt Stock Exchange in Germany. Thomas Lohnes/Getty Images

Donald Trump is seen on a TV screen below the graph showing the day's course of the DAX at the Frankfurt Stock Exchange in Germany. Thomas Lohnes/Getty Images
Listen Now

Among many other things, President-elect Donald Trump will now be responsible for America’s global trade policy. How his administration handles it will be very interesting, because he spent a tremendous amount of time on the campaign trail attacking international trade, various trade deals and American companies that manufacture abroad. What happens next is of great interest to American companies, global markets and could be of great consequence for America’s economy and its workers.

The idea of a hard-core skeptic on trade and globalization in the White House is remarkable. This election smashes a pattern that has held for a long time.

“It’s been true for decades in America that whether we’ve had Republican or Democratic presidents and Congresses, there’s been a sufficient set of people in Washington that voice the argument for why trade — and globalization more broadly — do benefit America overall, on average,” explained Matt Slaughter, dean of Dartmouth’s Tuck School of Business and a former White House economic adviser. “Those arguments still hold true in terms of the data, and yet for a set of reasons, the primary of which is so many people worrying about their jobs and their own personal income, for good reason, those arguments are not carrying the day.”

What does have traction is a growing frustration among many Americans that globalization is hurting them more than helping. Trump’s anti-trade message got him support in areas hit hard by manufacturing job losses, likely a factor in those surprising wins in states like Pennsylvania and Ohio, both of which voted for President Barack Obama in 2012.

The anti-trade rhetoric set off alarm bells in boardrooms of U.S. companies that do business overseas.

“I think all American companies are hoping that once the heated rhetoric of the presidential election season dies down, that more reason will return to trade policies of the U.S. and that the U.S. will go back to promoting freer trade,” said Eswar Prasad, a Cornell professor and author of “Gaining Currency.”

A key question about the Trump administration: How much of that anti-trade talk was just to get votes and how much becomes policy? In any case, trade deals are in the crosshairs, starting with the Trans-Pacific Partnership, between the U.S. and the Pacific region. The Obama administration thought it might be able to push it through the lame-duck session of Congress. Political observers saw that as a long shot with a Hillary Clinton victory and now all but impossible after Trump’s win.

Far from approving sweeping new trade agreements, the Trump administration could go in the opposite direction. On the campaign trail, Trump attacked NAFTA, the decades-old trade deal between the U.S., Mexico and Canada. He has promised to pull the U.S. out of it altogether unless terms are renegotiated in America’s favor. He’s also gearing up for big trade fights with China.

There’s also the Transatlantic Trade and Investment Partnership to deal with, which involves trade between the U.S. and Europe. It’s got a long and uncertain road to even being ready for approval, with skepticism high on both sides of the Atlantic.

It all adds up to an environment where American companies that want an easier path to selling their stuff abroad are going to have a very hard time getting their way.