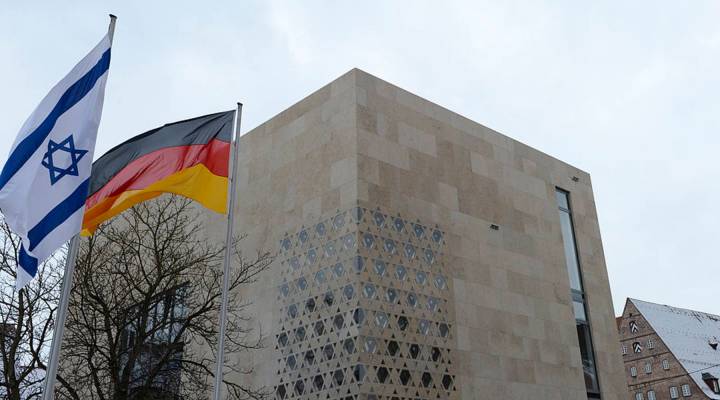 COPY
Outside view of the synagogue of the israelite religion association Wuerttemberg in the southern German city Ulm. CHRISTOF STACHE/AFP/Getty Images

Outside view of the synagogue of the israelite religion association Wuerttemberg in the southern German city Ulm. CHRISTOF STACHE/AFP/Getty Images
Listen Now

Some British citizens who voted in last summer’s referendum for the UK to remain in the European Union are exploiting a curious way of beating Brexit and keeping their European citizenship. These are descendants of the tens of thousands of German-Jewish refugees who fled the Nazis and settled in Britain in the 1930’s. Under Article 116 of Germany’s Basic Law, they  have the right to re-acquire the German citizenship stripped from their forbears. Hundreds are doing so in order to keep a toe hold in the EU.

“I applied for psychological reasons” said Oliver Marshall , a 58 year old academic , whose grandmother lost many close family members in the Holocaust.  “I wanted to continue to feel part of Europe. To have my European citizenship taken away from me on a whim one day in June filled me with anger.” Marshall had no qualms about becoming German — which does not entail the loss of British citizenship — because Germany  has confronted its dark history and is today a completely different nation although he admits that his grandmother — now deceased — would not have understood his decision. “ I remember her saying that she hated Germans.” Marshall said.

Some 400 descendants of German-Jews who fled the Nazis and settled in Britain have overcome the obvious family reservations and   applied for German citizenship following the Brexit referendum. Michael Newman, Chief Executive of  the Association of Jewish Refugees in London, has had dozens of inquiries about this individual route back into EU membership. It’s an ironic twist for his organization.

“One of the things the AJR did after World War II was to help Jewish refugees become naturalized British and here we are 70 years later passing on information about their descendants acquiring German citizenship.” Newman told Marketplace.

Reclaiming the  lost citizenship has  practical benefits. Just ask 28 year old research scientist Sam Bowers. He got his German passport 2 months ago and as a result will retain the automatic right to live and work anywhere in the EU even after Britain pulls out of the 28 nation bloc.

“It is very valuable to have access to working in any of the other 27 European countries so that really increases your options.” he said.

Like many scientists , Bowers – a tropical ecologist — fears his research funds in Britain might dry up after Brexit; another reason for wanting unfettered access to work elsewhere in the EU.

But not every descendant of Holocaust victims is in favor of this Brexit avoidance strategy.

“It’s madness” declared Harry Heber, who came to Britain from Austria 78 years ago  as a 7 year old refugee.

“The idea of going back to Austria having been hounded out by the Nazis is absolutely horrendous.” he said.

Heber – a retired optician — claims that anti semitism is still rife in parts of continental Europe and that apart from Israel, Britain is the safest country on the planet for Jewish people.

Anyway, he questions the need for European citizenship as  he doesn’t believe that Brits will have any serious trouble living or working in Europe after they leave the EU. But then he voted for Brexit.