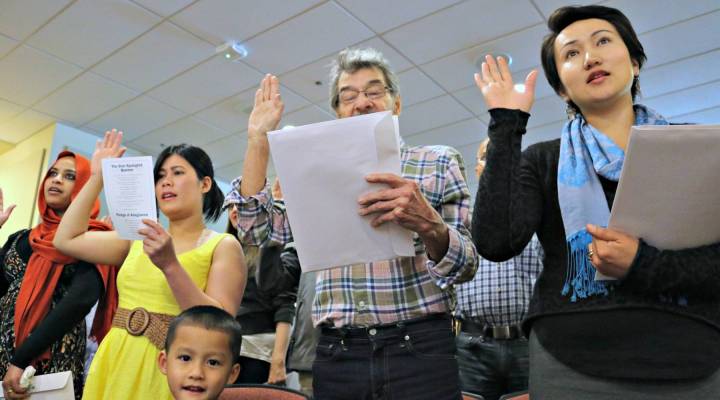 COPY
A naturalization ceremony in Washington. Tommy Andres/Marketplace
How The Deck Is Stacked

We got lots of questions on that video, so I’m going to answer some of them.

It depends on the operation — they’re either paid hourly rates or a piece-rate. That is, a price per bucket of apples, or whatever it is. We were in places that paid between $11 and $13 an hour. That’s pretty good, actually, above the prevailing minimum wage in most places.

In terms of where they live, and how often they have to move, it depends. You’ve got some year-round employees who own their own homes, some rent, some live with families in the area. Seasonal workers stay in temporary housing. Point of fact: as a condition of the H-2A visa, they are required to be in company-provided housing.

Finally, a lot of seasonal workers are exactly that — seasonal. They pull up stakes and move to where ever the crops are, and they bounce around.

Every single person we asked about the election who runs a farm just laughed, And not in a good way. They’re extremely worried we’re not having the right conversation. They are worried it’s become skewed toward the idea of undocumented and illegal migrants working here, to a point that’s not healthy.

They don’t think the national conversation that we’re having is going to result in better policy and they are not sure — even setting aside the presidential race — that Congress is equipped to deal with immigration in a substantive way that will meet their concerns.

If you think about why we need immigrant labor in the agricultural field, specifically, it’s because Americans don’t generally want those jobs. I spoke to one woman who said, “you know, when we had Americans come for these jobs, they left after a half a day.”

These growers are not convinced that Congress is equipped to handle the kind of conversation it would take to make sure that that would work out right.

In hops picking season, and I imagine in most other harvest seasons, crops are harvested 24 hours a day, seven days a week. You’re working 80-hour weeks until the crop is in.
Other places in non-harvest times, you start at dawn and you work until the day’s work is done.

Not for nothing, agriculture workers in this country are exempted from overtime rules.

Immigration policy is foreign policy. Congressional leaders and the White House have to work with other countries to figure out how their people come here and what the rules are.

Here’s a quick number: Workers in the United States sent $24 billion back to their families in Mexico last year. That’s just one country in one year. Imagine if you’re in the Mexican economy, and all of a sudden $24 billion disappears. That would be a problem. It would be a problem for the Mexican economy, it would eventually be a problem for this economy. So they are all intertwined, it is all one giant piece of policy, immigration policy and foreign policy here are tied together.

Those are just a couple of questions we got, leave us more and maybe we’ll do this again.

The short answer is yes. Surveys find more than half of immigrant farm-workers are undocumented. If they go away, you can imagine what happens to our food supply — to large corporate farms and smaller outfits, like Mosby Farms in Auburn.

In technology it’s a different kind of thing, because overwhelmingly those folks are here on what are called H-1B visas, and they’re generally documented so they wouldn’t be deported. If you think about the agriculture side of the house, yeah, it’d be a real big deal.

CORRECTION: An earlier version of this story incorrectly stated the location of Mosby Farms.