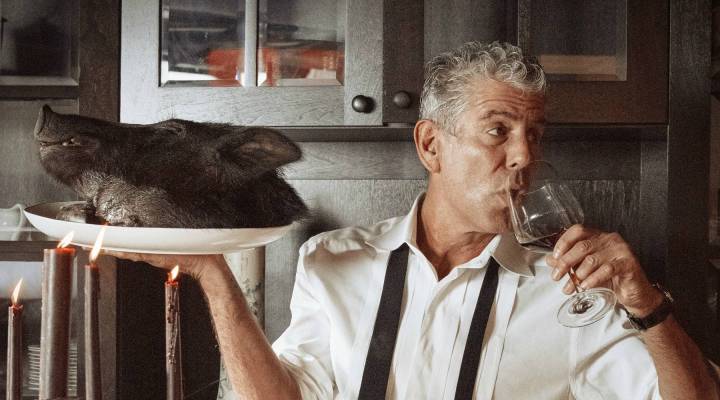 No matter who you are, you’ve probably had a rough day at the office that changed your perspective, or maybe you made an impulse purchase you really, really wish you could take back. This week, writer, chef and world traveler Anthony Bourdain took our money-inspired personality questionnaire. Bourdain’s cookbook  “Appetites” is out now.

What is something that you bought that you now completely regret buying?

I ate at Johnny Rockets in an airport once and it opened up an abyss of depression and self-loathing, a spiral of self-hatred, rage, and despair that lasted weeks.

So yes, that that one Johnny Rockets burger was easily the purchase that I regret anything in memory.

Do you remember what you had?

I ordered a cheeseburger, and it was delivered with such utter contempt and lack of care that for a time [it] made me fear for the entire human race and the future of the planet.

I mean, you know it doesn’t take much to set me off.

When did you realize that being a food enthusiast could be an actual career?

I guess, I’d written “Kitchen Confidential,” [and]  I thought it would be delusional to expect that I could ever make a living writing I mean that’s not a reasonable expectation. I was 44 years old, I was still dunking french fries for a living.

But after a few months of keeping the job, because I figured this can’t last, it just kept going and going and the restaurant was filled with journalists all the time, and people were offering me things, and eventually I reached this point where I thought, “If I’m not really stupid I don’t screw up I might actually be able to make a living doing this for a while.”

In the back of my head I always figured I could go back to brunch. I can always cook brunch. I hate cooking brunch but I’m good at it, and it’s very difficult to find someone who can crank out 300 omelets and eggs bennys on a Sunday morning for a bunch of, you know, hungover people who slept together the previous night and now hate each other and are looking for a venue where they can break up without awkwardness.

My most prized possession — like a physical object — is probably my knife made by Bob Kramer, he hand-made me a knife. It is the most terrifyingly expensive, beautiful object that I own I’m almost afraid to use it. It’s so gorgeous, I mean, he makes his own steel … You probably could buy sports car for what it cost, but it is the single most beautiful physical object I own. It is a knife of the gods, it’s too beautiful even look out without just searing a hole right into your soul.

I’m afraid that even talking about it I’m making it dull somehow.

Oh, we’ll move on. What was your first job?

My first job was painting murals in a fun house in Palisades Amusement Park in New Jersey. I did a really bad job. Then bicycle messenger in Manhattan. I did that a lot when I was off from school

What is something everyone should own it no matter the cost?

Everyone should own a decent chef knife. It doesn’t have to be a really expensive one, but a decent one. One that keeps sharp, that [you] treat with respect [and] know how to use with some degree of competency.

What advice do you wish someone had given before you started your career?

Look, all I can tell you is this, the most important lesson I ever learned in life, that has carried me through everything I do, I learned as a dishwasher. It’s really simple: Show up on time always.

It says everything about you. If you do that every day you show yourself sort of person worth trusting and investing time and effort and friendship and all those other things. If you don’t show up on time, it’s already a slippery slope.