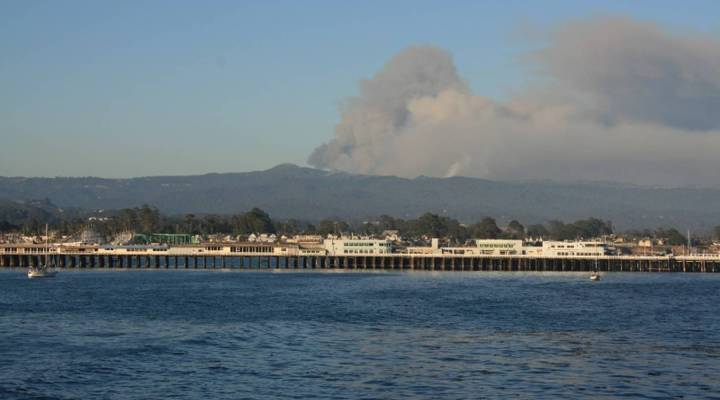 COPY
The Loma Fire burns in California’s Santa Cruz Mountains in September. The fire would consume more than 4,000 acres—seven square miles—before it was fully contained in October. Scott Cohn

The Loma Fire burns in California’s Santa Cruz Mountains in September. The fire would consume more than 4,000 acres—seven square miles—before it was fully contained in October. Scott Cohn
Listen Now

Wildfires are an unfortunate fact of life in California, and a five-year drought is only making matters worse. Since the beginning of this year, more than 5,300 fires have broken out in the state. That is a 16 percent jump from a year ago.

The California Department of Forestry and Fire Protection or Cal Fire — a sprawling agency with a budget as large as those of some entire states — takes pride in the fact that even with the increased fire risk, 95 percent of fires in the state are contained to 10 acres or less. Officials say a major reason is Cal Fire’s communications department, which is constantly coming up with new ways to get the word out about fires and fire prevention.

“We can do a great job and we can respond to a fire quickly, but if the public doesn’t know what is happening and isn’t doing what they need to do, whether it’s evacuation, preparation, then we’re not doing our job,” said Cal Fire Assistant Deputy Director Daniel Berlant. An 11-year veteran of the department, Berlant put much of the communication structure in place.

In the general scheme of things, it is a small operation — fewer than 20 full-time staffers and a $1 million budget in an agency with 5,400 permanent employees and a budget of more than $2 billion. That might help explain why Cal Fire’s statewide communication hub, tucked into the 15th floor of a state office building in Sacramento, sometimes has the feel of a Silicon Valley startup.

The mission is two-fold: provide the most current information to an anxious public about fires burning in the state — sometimes dozens at once — and at the same time remind people about fire prevention. Not long ago, that was accomplished through press releases, posters and community visits.  All that still goes on. But Berlant said the internet and social media have revolutionized the process.

“Now, we have over 20 different accounts. We have 10 different platforms,” Berlant said.

Cal Fire is on Facebook, Twitter, Instagram and Snapchat, among others. When Facebook launched its Facebook Live feature earlier this year, Cal Fire was broadcasting updates the first day the service was available. The department prides itself on being an early adopter, at least for a government office. Cal Fire launched its first web site in 1997, a few months after Google went live. Today, the agency has 10 web sites including the main site that carries updates on every fire.

Cal Fire webmaster Alisha Herring — an accountant by training who got most of her internet knowledge on the job — said traffic can get busy during the peak of fire season.

Getting accurate information onto the website and social media — and satisfying the public’s voracious appetite for news —  requires an army of public information officers in the field, many of them borrowed from local departments. The process was on full display in late September when fire broke out in the Santa Cruz Mountains south of San Jose.

The fire was dubbed the Loma Fire. (Every fire gets a name, but unlike hurricanes, there is no ritual or naming committee. The local fire dispatcher simply assigns a name based on the nearest landmark — in this case, a street called Loma Prieta Road.)

As the fire began a path of destruction that would ultimately claim nearly seven square miles and a dozen homes, Cal Fire sent in not just 800 firefighters but also a team of about a dozen public information officers. Some answered questions for local residents. Others dealt with a swarm of media.

Battalion Chief Scott McLean, who recently took over as Cal Fire’s chief spokesman, was there to oversee the operation, as well as set up community meetings, and coordinate tours of the damage by government officials. But the most crucial aspect is getting information out fast.

“Things change in less than a minute,” McLean said. “We need to have that ability to take care of rumor control for an example, or to get that information out right away.”

That is where social media come in. Every major fire now has a public information officer on site dedicated exclusively to social media. At the Loma Fire, that duty fell to Capt. Kenichi Haskett, in from Los Angeles. He was responsible for posting pictures and video, and putting out status updates and tweets, including twice daily updates on acreage and containment —received from fire teams in the field— that Californians have come to take for granted.

“We’re trying to reach as many as possible, trying to keep up with the times and different ways of communicating,” Haskett said.

Cal Fire said that its posts about the Loma Fire, which was active between Sept. 26 and Oct. 12, drew 1.6 million Facebook views and 740,000 Twitter impressions, mostly in the first week. And despite the size and ferocity of the fire, no one was injured.