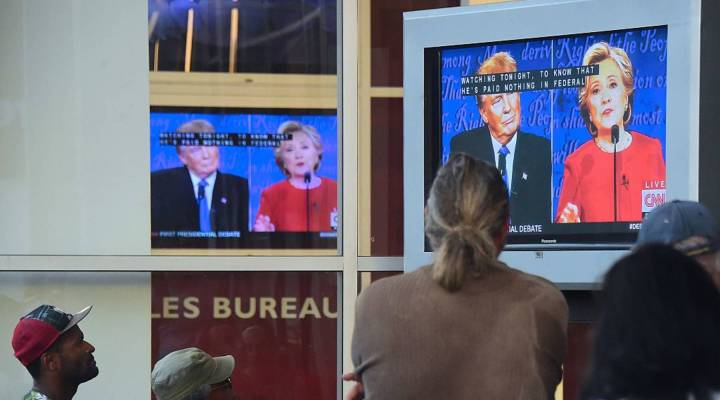 COPY
People gather to watch the first US presidential debate between Hillary Clinton and Donald Trump, nominees for the Democratic and Republican parties respectively, off a television set in front of an office building in Hollywood, California.   FREDERIC J BROWN/AFP/Getty Images

People gather to watch the first US presidential debate between Hillary Clinton and Donald Trump, nominees for the Democratic and Republican parties respectively, off a television set in front of an office building in Hollywood, California.   FREDERIC J BROWN/AFP/Getty Images
Listen Now

Before last night’s presidential debate, Republican Donald Trump had a pre-game show all his own on Facebook Live.  Now there is speculation Mr. Trump is considering Trump TV. Which made us wonder, what does it take to get a brand new network off the ground?

Number one, a brand. But a little caution: Oprah Winfrey had a brand and a popular syndicated talk show. But it took OWN four years and $500 million in investment before it turned a profit.

A network also needs lots of amazing content to stand out from the nearly 2,000 cable channels already out there.

For all of those things, you need money — hundreds of millions of dollars, according to Erik Brannon, a tech and media analyst at IHS. TV networks get their revenue through ads, yes, but also from carriage fees. These are paid by cable and satellite service companies per subscriber, per month. It might be 10 cents, but for a network to pay off the enormous cost of good programming, it needs  millions of eyeballs watching.

John Tarnoff, who co-runs the Entertainment Industry Management program at Carnegie Mellon, said the best platform for someone like Donald Trump is social media. “I mean I think that’s where he excels, ” he said.