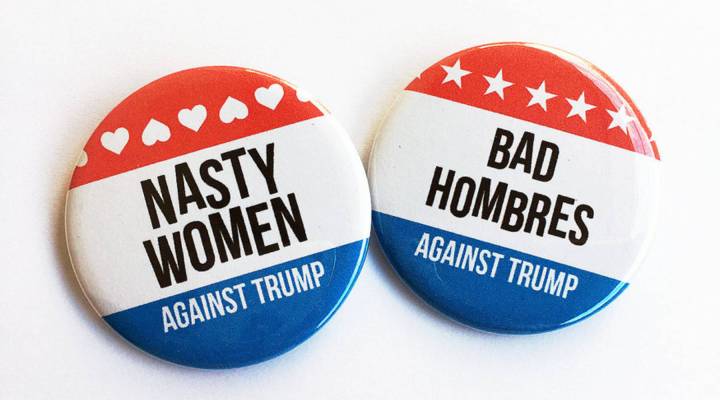 Donald Trump talked about plenty of policy during last night’s third and final debate, but he also made some of the most memorable statements of the night, including calling immigrants “bad hombres” and rival Hillary Clinton a “nasty woman.”

His words not only set off an abundance of tweets, but also kicked off an election season staple: political merchandise.

These online marketplaces allow artists and crafty entrepreneurs to create timely merch without some of the obstacles traditional retailers face. Take Danny Brito, an artist in Florida. He has already sold “quite a few” of the pins he designed and pressed this morning:

“I decided to make them because I wanted to take what he considered to be insults, and use them against him,” Brito wrote in an Etsy message. He is just one of the many sellers taking advantage of online marketplaces, where it’s common to see a quick turnaround for designs. There are people selling mugs:

“I’m the Bad Hombre Trump Warned You About.”

And, of course, plenty of t-shirts:

A screenshot of the best-selling “nasty woman” t-shirts on Redbubble.com

This year’s election has been especially profitable for merch creators, thanks to the vitriol of both campaigns. CafePress told us in August that its swag sales were up 20 percent over the last presidential election. Last month, Clinton’s “deplorables” comment, also inspired a batch of campaign merchandise.