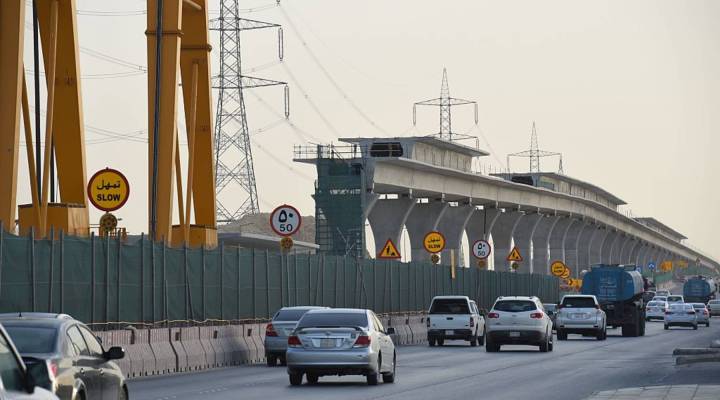 COPY
Vehicles drive past a construction site of a section of the Saudi capital Riyadh's $22.5 billion metro system. Many of Saudi Arabia's investment in public infrastructure projects, such as the metro, occurred just before a sharp decline in oil prices. FAYEZ NURELDINE/AFP/Getty Images

Vehicles drive past a construction site of a section of the Saudi capital Riyadh's $22.5 billion metro system. Many of Saudi Arabia's investment in public infrastructure projects, such as the metro, occurred just before a sharp decline in oil prices. FAYEZ NURELDINE/AFP/Getty Images
Listen Now

Saudi Arabia has made the largest emerging-market bond offering, with the sale of $17.5 billion in debt on Wednesday.

For the oil-rich nation, it’s a matter of timing.

“They’ve gone through close to $200 billion in the reserves, and they’re trying to avoid continuing just drawing down on their reserves in order to cover their deficit spending,” Ottaway said.

Saudi Arabia had kickstarted its spending in recent years, investing in major development projects in the days before a major decline in oil prices.

“They’re building housing, and highways, and infrastructure, hospitals, and schools … petrochemical plants and stuff,” said Joe Gagnon, a senior fellow at the Peterson Institute for International Economics. “That ramped up just before the oil price collapsed. Sort of bad timing for them.”

The kingdom decided to overhaul its economy: austerity policies, selling off part of its state-owned oil company and now the bond sale.

Though Saudi Arabia’s timing may have been off when it came to spending, it may be right on when it comes to selling debt, according to some asset managers.

“We’ve been talking about it here as them tapping into an oasis of demand,” said Raman Srivastava, deputy chief investment officer at Standish Mellon. “Really, it’s coming from the thirst for diversification, liquidity, yield. It’s coming from the fact that oil prices are stable to slightly rising.”

Srivastava also pointed to recent successful debt sales from other nations, including one from Argentina earlier this year, in which it offered $16.5 billion in bonds.

With Saudi Arabia’s ready access to oil, the bonds are pretty low risk, making it a likely target for investors.

“I do think the timing of this is quite good and should be met by some pretty good demand in the market,” Srivastava said.