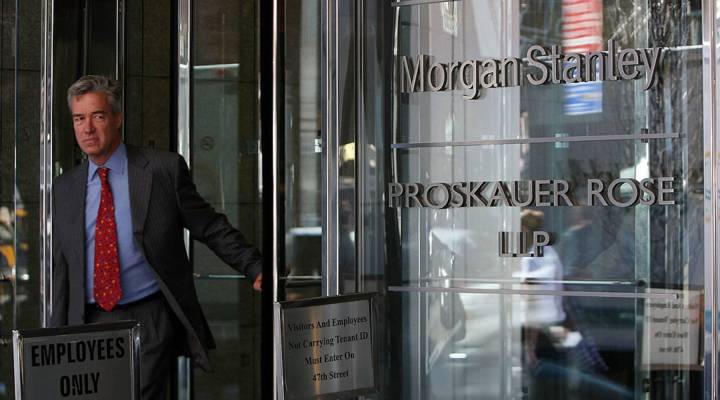 Morgan Stanley turned in a better-than-expected third quarter profit today, following similar news from Goldman Sachs Tuesday. Both banks reported a more than 50 percent rise in profits, driven by a rebound in trading. The news caps off a strong earnings season for big banks generally. JPMorgan Chase, Citigroup and Bank of America all beat analyst expectations.

This is in spite of grumbling that the Dodd-Frank financial regulations enacted after the financial crisis have made it harder for banks to make money.

“I think we should take with a grain of salt any complaint that the regulations have choked out banks’ ability to make profits,” said Peter Conti-Brown, a financial historian and assistant professor at the Wharton School. “What we’re seeing today is that that’s not really true at all.”

Think of a bank as a manufacturer, said Richard Bove, an analyst with Rafferty Capital Markets. It takes in raw material — money, mostly in the form of deposits — and turns it into products it can sell, like loans, credit cards and securities. Because interest rates on deposits are so low, that raw material is cheap.

“The difference between the cost of the money and what they’re selling the money at, in the case of Bank of America, is about $32 billion,” he said.

Meanwhile, a lot of the costs that had been eroding that profit since the financial crisis — lawsuits, government fines, losses from bad loans — have been shrinking.

“As a result of that,” Bove said, “you come out with a pretty big profit.”

The good news, said analyst Stephen Biggar with Argus Research, is that profit appears to be coming from traditional parts of the business, like loans and fixed income sales and trading — not the kind of creative financial engineering that caused the financial crisis.

“This is not derivatives or anything exotic,” he said. “This is, in some cases, bread-and-butter banking that’s doing well.”

But, said Conti-Brown, the recent allegations of account fraud against Wells Fargo suggest banks may still be getting creative in ways haven’t found out about yet.