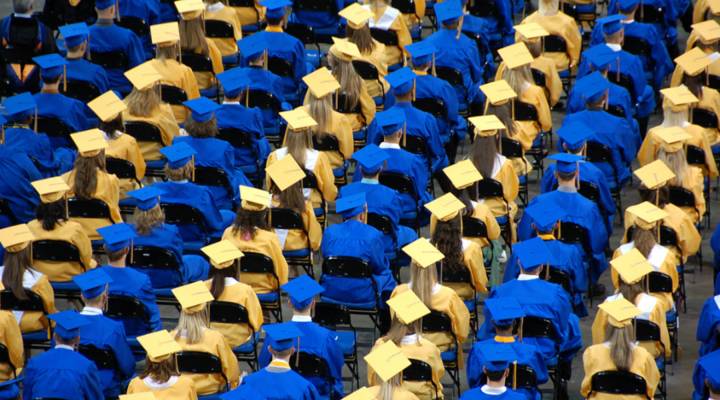 We learned this week that the national high school graduation rate is higher than ever. More than 83 percent of high school seniors finished on time in 2015, according to federal figures released Monday. The biggest gains were made by students learning English, low-income students, and black and Hispanic students, though big gaps remain.

The graduation rate has increased from about 71 percent a decade ago, said John Bridgeland, CEO of the public policy firm Civic Enterprises.

“That translates into more than 2 million more students graduating from high school rather than dropping out,” he said.

With a diploma those graduates are less likely to be incarcerated or live in poverty, he said, and more likely to be employed. But they aren’t necessarily prepared for college or careers.

About half of students take at least one remedial class in college, said Andy Smarick, a fellow with the American Enterprise Institute —  meaning stuff they were supposed to learn in high school. In community colleges, as many as 70 percent need remediation.

“We’ve asked educators to get more kids to graduate and they have succeeded at that, and so we should be proud,” he said. “The next hurdle is making sure that high school graduation is synonymous with college and career readiness, and we’re not there yet.”

Even as more students graduate, 12th grade reading and math scores have been fairly stagnant over the past decade. According to the National Assessment of Educational Progress, considered “the Nation’s Report Card,” just 37 percent of high school seniors are prepared for college-level coursework in those subjects.