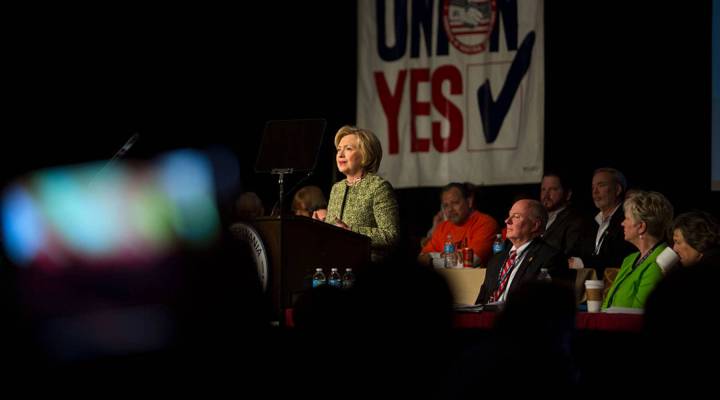 There’s been big spending by labor unions in this election — and even more in the last couple weeks. The powerful AFL-CIO has spent millions on 2016. Of course, labor unions have long supported Democrats, but this year they’re looking beyond the presidential race to the Senate and even farther down the ballot.

Union reps are already in battleground states from Ohio to Wisconsin doing what they do best: knocking on doors, making calls, handing out leaflets at factories. And over the coming weeks, voters in those states can expect an even bigger push.

“The final three weeks of this campaign we are gonna step up in major ways,” Josh Goldstein, spokesman for the AFL-CIO said. He said yes, they’re supporting Democrat Hillary Clinton, but also “all the way down ballot to local elections that really shape policy for people in their communities.”

Races from governor to Senate. The idea, he said, is to tip the balance on policies that matter to unions. Nelson Lichtenstein, director of the Center for the Study of Work Labor and Democracy at UC Santa Barbara, said Republican-controlled legislatures tend to have laws unfriendly to labor unions.

Also, the Senate approves presidential appointees to key agencies like the National Labor Relations Board. “And there’s been a lot of obstructionist efforts to try to stop the NLRB from being funded, or fully funded, try to stop it from having enough appointees to carry on its business,” according to John Budd, professor at the University of Minnesota’s Carlson School of Management.

And it’s not just the NLRB. Unions care a lot about who’s in charge at the labor department and any other agency that weighs in on issues important to workers.