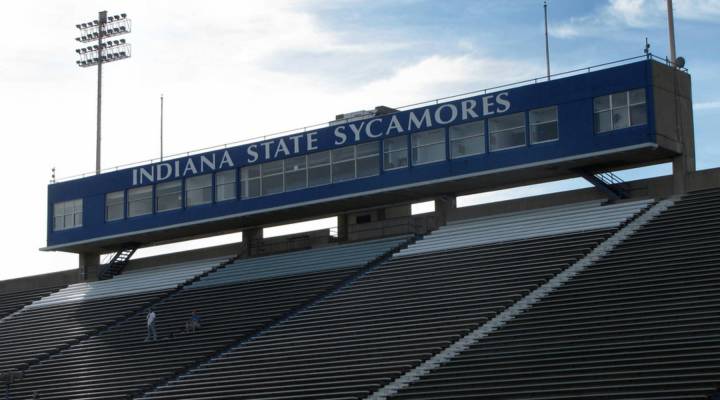 COPY
A sports stadium at Indiana State University (ISU), home of the Indiana State Sycamores, is seen. Nearly half of international students at ISU are Saudi. Saudi enrollment was down four percent this year at the school and is expected to drop again next year. Flickr

A sports stadium at Indiana State University (ISU), home of the Indiana State Sycamores, is seen. Nearly half of international students at ISU are Saudi. Saudi enrollment was down four percent this year at the school and is expected to drop again next year. Flickr
Listen Now

It’s tempting to think our presidential election is an entirely domestic affair. But a big chunk of the rest of the world is watching, and that includes foreign students who might consider coming here for college. American universities need those students more than ever, as the college-going population here gets smaller.

So the question is, after all the ugly rhetoric about immigration, will those students still want to come?

Here’s how important international students are to this country : There are almost a million of them enrolled in US colleges, up from just over half a million ten years ago; bringing an estimated $30 billion a year to the economy. From an educational standpoint, colleges say all students benefit from a multicultural campus.

“We’ve become a very global economy, and universities want to provide that to their students,” said Ben Waxman, CEO of International Education Advantage, which helps colleges market themselves to foreign students.

The survey didn’t ask why, but Waxman said he suspects Trump’s positions on immigration —  like a proposed ban on Muslims entering the country, and a wall on the Mexican border — had something to do with it. Eighty percent of Mexican students said they were less likely to study in the U.S. if Trump wins.

Mariami Dolashvili, from Ukraine, is already studying here, as a junior at University of Maryland, Baltimore County. She came on a scholarship, but had money been an issue, she said, she might have done things differently were Trump in the White House.

“If I would have to pay for myself and choose the country I want to go to, maybe I would choose some European country to go instead of coming here,” she said.

Whoever wins the election, a lot of damage has already been done, said Rose Kunnappallil, a graduate student from India.

“When I talk to people back home in India, there are a section of people who are now second guessing what the American people think about immigrants and of people coming to find their dreams here,” she said.

Foreign students typically pay full tuition, so even a small dip could have a big impact on American universities. For example, new restrictions on a Saudi Arabian scholarship program has meant fewer Saudi students at many U.S. campuses.

To be clear, none of the candidates wants to limit the main visa program for foreign college students, though Trump has proposed cutting a program that brings exchange students here to study or work for short periods.

Anti-immigrant sentiment is worse in many other countries, said Peggy Blumenthal, with the Institute of International Education, a research and advocacy group. A recent proposal in the United Kingdom would create a two-tiered student visa system, giving preference to students at more elite universities, she said.

“So I think when students look around the world and look at other potential host countries, the U.S. still looks far more welcoming and far more accessible,” Blumenthal said.

If that were to change, she said, colleges would work aggressively to keep the doors open.