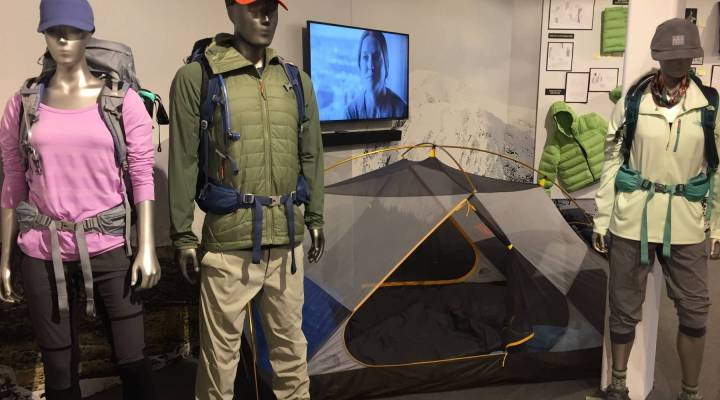 In 1966, a small retail store opened in San Francisco. Hells Angels worked the door, and the the Grateful Dead played a set. The company sold hiking and ski gear, and was named after the most difficult side of a mountain to climb — the North Face.

Wall of history and products at North Face.

Including the original mountain jacket and pants, the ubiquitous black puffy jacket, and to my delight, the black fleece jacket that I wore pretty much all through college.

Spaletto says the year 2000 was a turning point for the company.

Who is the core North Face customer?

“People like wearing the North Face when it’s raining, it’s cold, it’s snowing, it’s windy and they need protection from the environment. And the other side is, I’m a runner, I’m a skier, I’m a climber, and I’m looking for North Face to be better at my sport. We’re firmly established in the core principles of our brand. And we know that does include that moment on the mountain, whether that’s skiing or backpacking or trail running, that’s a really important moment for us to outfit them in those activities. But we’re also finding that the moments before and after those activities are sometimes the whole reason why they go to the mountain to begin with.

A tent is pitched to test its waterproofing.

What about the people who are wearing their mountain gear to brunch. What’s your athleisure strategy?

We used to think, “Well, that must be a different consumer that lives in the city versus in the mountains.” And that’s not true. I think today’s consumer is saying, “North Face, you’re my brand of choice, but I want you to be part of my everyday life.”