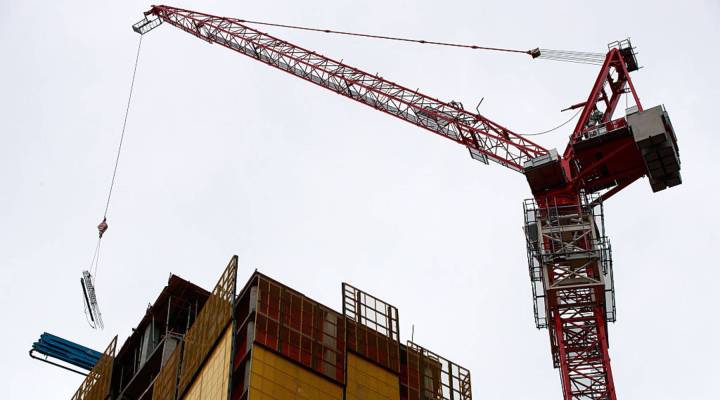 COPY
A view of construction on a new residential building in the Hudson Yards development in New York City. Drew Angerer/Getty Images

A view of construction on a new residential building in the Hudson Yards development in New York City. Drew Angerer/Getty Images
Listen Now

When the presidential candidates aren’t discussing the latest scandal or leak, the issue of jobs comes up pretty regularly. It’s an area where you can find some agreement between the candidates: Both Hillary Clinton and Donald Trump want to increase infrastructure investment as a way to create more jobs.

However, infrastructure spending looks a little different today than it did in the past. Congressional earmarks to fund big projects are a thing of the past, and have been for years now. So individual states have come up with different strategies to pay for projects.

In Virginia, officials from the commonwealth’s Department of Transportation partnered with a private company in a multimillion dollar effort to add additional express lanes to I-95.

“When we do these public-private partnerships,” said Paul Nishimoto, the project manager for the effort, “then we have the benefit of the private funding being put into the initial capital costs to fund the project. It’s just kind of a matter of fact that the public funding is limited. So this just helps us to progress projects at a much faster rate.”

Karen Kunz, an associate professor at West Virginia University, studies infrastructure funding, and said states and local communities only have a few tools to scrounge together money for projects.

“So the state initiatives have been  primarily …. gas taxes or DMV or motor vehicle sales taxes,” she said. “But you can only raise gas taxes and DMV fees so much.”

There are also ballot measures to raise other taxes, several of which are coming up across the country in November. That’s to address some of the massive amount of work needed to fix American infrastructure. The American Society for Civil Engineers says we need $3.6 trillion in infrastructure investment.

“Which is about, give or take, the annual federal budget,” Kunz said. “So if we didn’t spend any federal money on anything else, we could bring our infrastructure up to where it needed to be — nothing, no social security, no Medicare, no Medicaid, no defense, no nothing, we could cover it.”

Facing that reality, Virginia and other states aren’t waiting by the phone for Washington to call with cash.

“We know, and not just our state, but across the country, there’s not enough funding to do all the projects,” said Virginia Transportation Secretary Aubrey Layne. “And I need to point out that public-private partnerships are great but they’re not a substitute for public dollars. What they are is an enhancement.”

He said the shortage of federal funds has forced states to be more creative and careful with spending. Additionally, Layne said, under the new system, the projects that do get approved tend to be fully funded from the start, which can help prevent embarrassing “bridges to nowhere.”

Correction (Oct. 13, 2016): A previous version of this story misstated the amount of infrastructure investment deemed necessary by the American Society for Civil Engineers.

Correction (Oct. 15, 2016): A previous version of this story misspelled the name of Professor Karen Kunz.