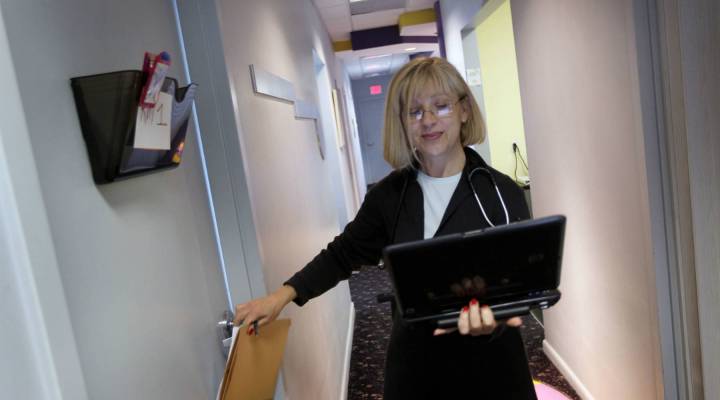 The Obama administration has pushed to get doctors and hospitals to ditch all their paper records and get wired up.

The idea was to be more efficient, avoid medical mistakes like prescribing the wrong medication, and save money.

After the federal government invested more than $30 billion, most hospitals and physicians now have electronic health record systems.

Yet some software vendors who sell these things are tucking hidden fees — some small, some big — into the contracts, making it hard to deliver on the promise to share patient data.

So the Department of Health and Human Services has released a sort of ‘how to negotiate’ guide to help doctors and hospitals sidestep contractual minefields and not get tripped up by the fine print.

Marcus Johnson, who heads up IT at the Arkansas Verdigris Valley Health Centers in Oklahoma, said the clinic was thrilled when it bought an electronic health records system. Then the clinic saw the software vendor’s contract.

“The gibberish in the contracts that they sent, good luck reading that,” he said.

Staff assumed they’d finally be able to track the care their patients got from dozens of hospitals and doctors all around Tulsa.

Instead they got schooled in the art of a bad deal.

“To send out an alert to a patient to say they have an appointment, it’s 10 cents per message,” said Johnson.

And that’s not all.

To share patient data the clinic would have had to pay a one-time $750 facility fee and $50 per month for every nurse and doctor who wanted to exchange data.

So for the last six years patient data may as well have been kept on paper.

“That story is very common, unfortunately. So it’s a problem,” said Andy Slavitt, the acting administrator for Centers for Medicare and Medicaid Services.

Federal health officials know there are lots of small practice physicians out there negotiating with banks of lawyers hired by some of the largest software companies on the planet.

“We have looked at all the clauses that we can find in contracts, and we’re publishing a list of best practices so they can be incorporated into the contracts that people use,” he said.

This manual is another signal the Obama administration wants vendors to put patients ahead of financial gain.

But Dan Haley with Athena Health – one of the industry’s biggest players – isn’t sure the guide will much matter.

“It’s not a viable tactic,” he said. “Doctors don’t exist in a bubble where time is frozen in 1996. They operate in the same world we operate in where information is ubiquitous, and so they want it inside their practices.”

In Oklahoma, Marcus Johnson says they’ve quit their old vendor. The clinic has hired a new company that guarantees data will follow the patient, and the clinic can even send out appointment reminders for free.