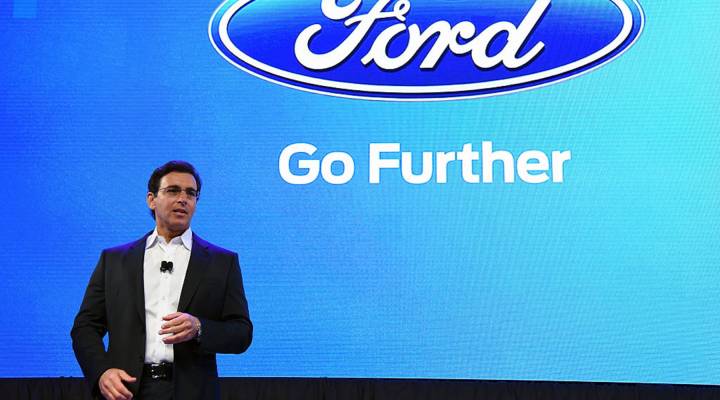 It’s been an eventful few months for Ford Motor Company CEO, Mark Fields. He recently announced two major initiatives aimed at securing the company’s future in mobility and self-driving cars. He’s also faced criticism from the GOP’s presidential candidate when Ford announced they would be moving production of small cars to Mexico, without losing jobs in the United States.

Fields notes there’s a difference between what’s said on the campaign trail and what happens after a candidate takes office. “We work with whatever administration is in power and very productively,” he says.

On why he wants Ford to switch from auto company to an “auto and mobility” company:

“The transportation systems that have served us so well around the world for the last 100 years—they’re not going to work for the next hundred years when you look at population densities in cities. You know, today 50% of the population around the world lives in cities. That’s probably going to grow to 60%-65% in the next 15 years. That means there’s more congestion, more traffic. So we’re stepping back and saying, you know, people are really going from a mindset of owning vehicles to owning them and sharing them, when you look at things like Uber etcetera. And we’re stepping back and we’re saying to ourselves, how do we thrive in that environment? And that’s why we’re going from an auto to auto and mobility company.”

On how manufacturing in America has become a popular subject this election season:

“When you rewind back to the Great Recession there was a lot of conversation of what’s the value of manufacturing, particularly auto manufacturing in the United States. And I actually was kind of appalled at the lack of understanding of how important manufacturing is to any country. Because not only–you know, here in this plant– for every hourly worker we have here, it produces eight or nine ancillary jobs or trickle down jobs in the local area. And a country that loses its ability to make stuff, in my view, declines over time. And that’s why I’m so encouraged by, since then, the importance of manufacturing and technology and the role technology plays in manufacturing has really gone up a notch.”

Inside the Ford River Rouge Complex, a car is seen in an assembly line.

On what Henry Ford might think about this company today:

“If you think about Henry Ford, he was the leading disruptor in his day. Whether it was the moving assembly line or the $5 a day wage or the first affordable v8 engine. And I think he would walk into this plant and say “Good job. You guys are continuing to look around the corner and say what does it take to move this business ahead. Not only in the next 12 months, but in the next ten years.”

Listen to the full interview on our Corner Office podcast on iTunes.