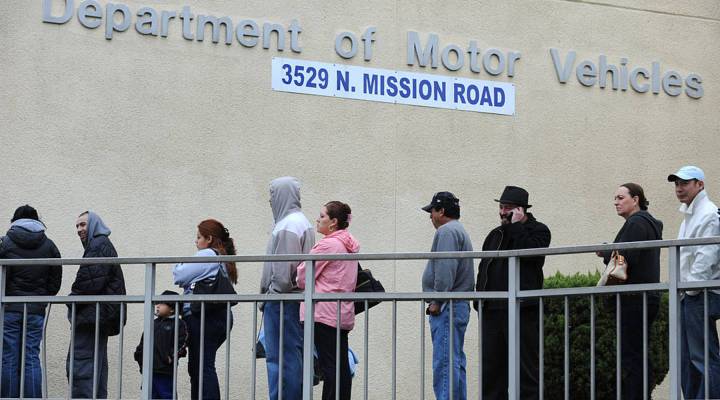 COPY
People wait in line outside of the State of California Department of Motor Vehicles (DMV) in Los Angeles, California. ROBYN BECK/AFP/Getty Images
Secretary of the Future

Oh, Department of Motor Vehicles. When it comes to government agencies, they are right up there with the IRS.

Nonetheless, DMVs around the country have been diligently working away on how to handle the future. Self-driving cars are coming – soon. And when they finally do pull up, it’ll mean some big changes at the DMV. What’s the government agency that’s responsible for issuing drivers’ licenses going to do when it’s unclear who the driver of the future will be — a human or an operating system?

“It really all started back at 9/11,” said Jenny Openshaw, vice president of sales and marketing for MorphoTrust USA. an identity solutions and security firm.

That’s when, she notes, people realized how easy it was for bad guys to get IDs in the form of drivers’ licenses.

“There is no national ID card, so the driver’s license has become the de facto national ID card. It’s what a store will ask you to bring out if they want you to verify your identity,” Openshaw said. “It’s what you use when you get on an airplane. It’s what the officer asks for when you might be pulled over a traffic stop.”

That’s why DMVs have been working on new technology to make identities more secure. Like using facial recognition and mobile licenses that would live on phones.

“Even when autonomous cars are very prevalent and there might not be as much of a need to test drivers for their knowledge before they get a license, there’s still going to be a need for the proofing process that goes on around your identity,” Openshaw said. “And so they may turn into more of the state identity bureau than the state department of motor vehicles.”

The Obama White House even created a project – the National Strategy for Trusted Identities in Cyberspace to help work on the issue.

He said he wants state residents to be able to do more than just get their license or tags at the DMV. So the Virginia DMV partnered with the department of Game and Inland Fisheries.

In Virginia, you can now get a death, marriage or divorce certificate at the DMV. Holcomb said it’s all about customer convenience.

“If you come into one of our 74 offices and have been blessed to have been born in Virginia,” he said,  “you can actually get a copy, across the counter, of your Virginia birth certificate.”

Many DMVs, though, still have a sticky reputation to grapple with. Just watch the animated film “Zootopia,” where Officer Judy Hopps, a rabbit police officer, finds herself in a bind. She’s in an enormous rush but is stuck, waiting for bureaucrats at the DMV who don’t just seem to be slow moving. They’re actually sloths.

But try to be a little bit open minded about DMVs, said Mark Fagan, a lecturer in public policy at Harvard’s Kennedy School of Government.

“You do need to understand, their work task is actually pretty hard,” he said. “In California they do 76 million transactions a year. It’s easy to mess up when you’re doing 76 million transactions. They have a lot of functions. They’re licensing drivers. They’re licensing cars.  They’re managing organ donation, enforcing traffic laws. They also operate in a highly prescribed environment. You’ve got to follow the rules. There’s not a lot of flexibility. They have comparatively limited budgets.”

Bottom line, at least for now: we need the DMV.

“Each state is still going to continue to want to know what vehicles are on the road,” Fagan said. “Who owns them and, equally important, have they paid their associated taxes to do so?”

One day, in the future, notes Fagan, if we have fewer drivers we may see government offices consolidating. Just imagine – paying your taxes and getting your license at the same time.