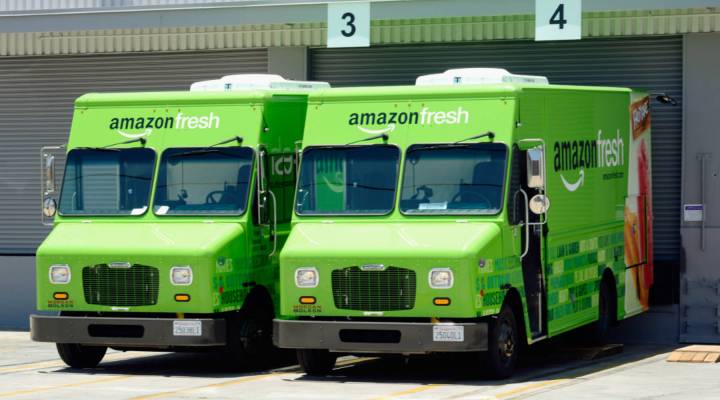 COPY
There are reports that Amazon is planning a line of brick-and-mortar stores that Fresh members will get exclusive access to. Kevork Djansezian/Getty Images

There are reports that Amazon is planning a line of brick-and-mortar stores that Fresh members will get exclusive access to. Kevork Djansezian/Getty Images
Listen Now

The online retailing giant Amazon is reportedly looking to expand its role in the grocery world with new brick-and-mortar convenience stores and curbside pick-up locations. The Wall Street Journal said members of Amazon’s same-day delivery subscription service would have exclusive access to the grocery stores. That food delivery service, Fresh, costs $15 a month, on top of the annual $99 Amazon Prime fee.

The convenience store concept would reportedly have perishable items, like milk and produce, to grab on the fly.

An Amazon spokeswoman said the company does not comment “on rumors or speculations.”

Amazon is known for its strong management of supply chains and inventories, according to Spencer Ware, a director at the global consulting firm AlixPartners. But he said perishables could present unique challenges.

“It’s not like a lot of their online ordering where a sweater or piece of electronics has a very long shelf life,” he said.

Even as some grocers struggle in a competitive environment, the sector does provide opportunities for Amazon. Retail consultant Burt Flickinger said the typical family spends $5,500 a year on groceries.

He said Amazon could capture a greater share of that pie, “and at the same time convert people over to Amazon Prime for everything from books to  consumer electronics, accessories, apparel.”

Flickinger said that could dramatically increase how much people spend through Amazon Prime overall.