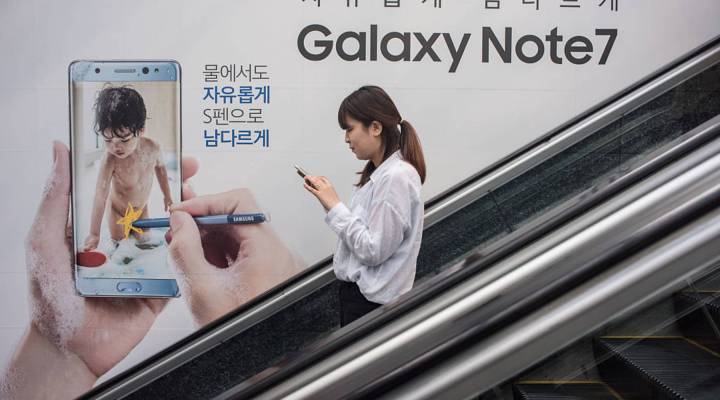 COPY
A woman looks at her mobile phone as she rides past an ad for Samsung's Galaxy Note 7 in the Gangnam district of Seoul on Monday. Samsung said Tuesday that it will no longer manufacturer the phone. ED JONES/AFP/Getty Images

A woman looks at her mobile phone as she rides past an ad for Samsung's Galaxy Note 7 in the Gangnam district of Seoul on Monday. Samsung said Tuesday that it will no longer manufacturer the phone. ED JONES/AFP/Getty Images
Listen Now

Update: Click on the audio player above to hear Molly Wood and Kai Ryssdal discuss possible next moves for Samsung.

Samsung is permanently stopping production of the Galaxy Note 7, a phone from its flagship line that has been overheating and catching fire.

The company had already pulled back on production and halted sales due to reports of the phone’s safety issues, but finally decided to scrap the phone Tuesday.

“We recently readjusted the production volume for thorough investigation and quality control, but putting consumer safety as top priority, we have reached a final decision to halt production of Galaxy Note 7s,” the company said in a statement to BBC Business. “For the benefit of consumers’ safety, we stopped sales and exchanges of the Galaxy Note 7 and have consequently decided to stop production.”

Phone owners should be able to get a refund or exchange the device for a different Samsung phone, according to the BBC.

Experts have questioned if Samsung’s brand could bounce back from this very public production and safety issue.

The South Korean electronics giant’s snafu may also mean an opportunity for its rival Apple to increase its dominance as a smartphone maker or for Google, which has just entered the highly competitive smartphone market, with its new Pixel phone.

Samsung, which makes both high-end and low-end devices, is the top smartphone manufacturer in the world. It had 22.8 percent of the market share in the second quarter of the year, which was an increase from the year before, according to IDC. Ironically, IDC analysts had credited that growth to the success of previous phones from the Galaxy line. Meanwhile, Apple, which focuses on high-end phones, was on a 15 percent decline in market share from the year before.