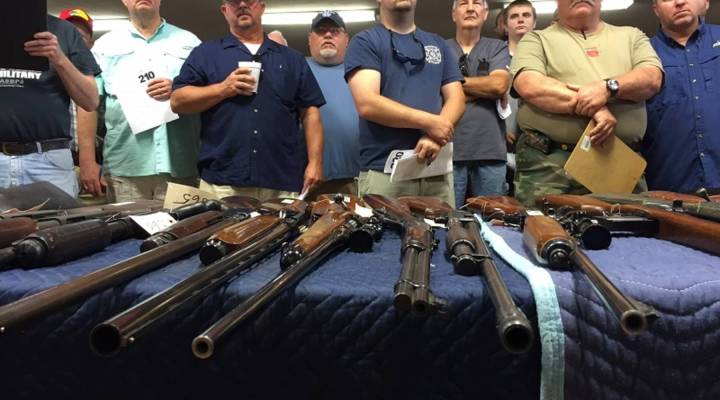 About a hundred people were packed into a one-story brick building in Macon, Georgia, at the T. Lynn Davis Realty & Auction Company. The crowd eyed guns up at the front where auctioneer Frankie Howell calls on bids in the crowd. Up for sale is a 9 mm pistol.

That pistol that just sold used to be in the hands of the Bibb County Sheriff’s Office in Macon. The office for the first time is auctioning off dozens of guns it’s held onto — most are hunting rifles and pistols that were confiscated or used in a crime, like an armed robbery, the office said.

All of them sell in about an hour.

Bibb County Sheriff David Davis said in the past, the sheriff’s office used to crush these types of guns into scrap metal, but that changed four years ago, when state lawmakers passed a bill banning the destruction of the guns. Instead, it requires law enforcement agencies to sell the guns if they’re unclaimed.

Davis said he’s had some concerns, but his department was running out of space to store the weapons.

“I can understand reticence about selling weapons — that they may wind up on the street, they may wind up doing harm to someone, Davis said. “But we have to do what the law says, and we do get a positive out of it in that there some funds that will come to the agency and lessen the burden on the taxpayers.”

Those buying guns at the auction needed to have concealed carry permits, Davis said.

Bidders at the T. Lynn Davis auction house in Macon, Georgia, look at what’s for sale. The firearms were seized by the Bibb County Sheriff’s Department.

But not all law enforcement agencies in Georgia have followed suit. The Atlanta Police Department hasn’t auctioned guns and declined to comment for this story. A spokesperson for the department has said the agency’s primary goal is to return guns to their rightful owners.

Georgia’s one of about 10 states that have put similar laws on the books in recent years. The measures have been backed by the National Rifle Association.

“It just makes no sense to destroy perfectly good firearms that can be used to raise money for these cash-strapped police departments,” said Catherine Mortensen, a spokesperson for the National Rifle Association.

But in Tennessee, where a similar law passed last year, Chattanooga’s Police Chief Fred Fletcher has decided against selling the guns.

“I don’t believe that the small amount of money raised is worth the risk to the brave men and women who put themselves between those firearms and our community on a daily basis,” Fletcher said.

He said last year, his officers confiscated more than 700 guns, and selling them would go against what his officers have been doing.

“We have made it a deliberate effort to target anybody who would carry guns illegally — and put them in jail and take those guns off the street where they won’t hurt our community members,” he said.

Back in Macon, resident Willie McCrary stood in line to register for the auction.

“It’s a good thing as long as you have the proper documents, and the license and stuff that you need to get it legally — I think it’s a good thing,” McCrary said.

In the end, the sheriff’s office said it raised more than $18,000 from the auction. Davis said the department can use the money to buy equipment, fund officer training and outreach efforts.

“With the way the economy is, and the way things are, we want to find the most bang for our buck — pardon the pun,” Davis said.

His office said it’s now getting ready to auction off hundreds more firearms it has in store.