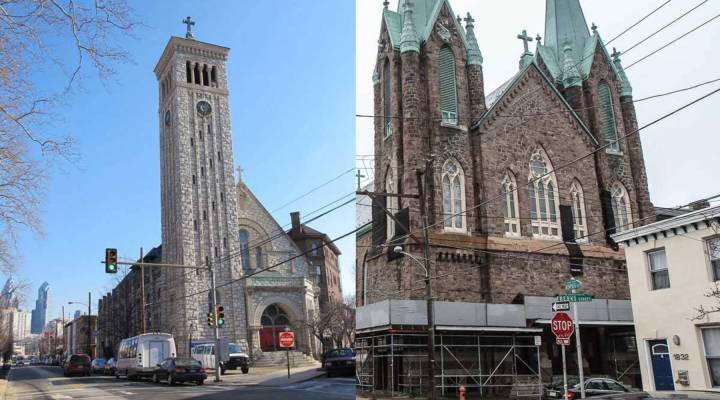 COPY
Philadelphia’s former St. Anthony of Padua Church (left) has been converted into upscale lofts, and apartments are planned for St. Laurentius' site, also in Philadelphia. Courtesy of Bobby Allyn

Developer Leo Voloshin is standing in front of an empty church in Philadelphia’s trendy Fishtown neighborhood.

“It has tall majestic spires. It has a beautiful green patina,” Voloshin said. “The church is just awe-inspiring.”

The 1880s church, St. Laurentious, the oldest Polish church in the city, has been sitting unused since 2013.

“You walk in and look up and the baby-blue ceiling is really just brings it all to life,” he said.

But if Voloshin’s vision come true, the only people who’ll see that baby-blue ceiling will be second-floor renters. He plans to redevelop the closed church into 23 single-bedroom apartments.

As demographic changes take hold, like young people leaving churches in large numbers, it’s getting harder for houses of worship to keep their lights on, causing more to merge and shut down. And it didn’t take long for developers like Voloshin to catch on to the new supply of empty churches.

More than a quarter of former houses of worship in the Philly area have been converted into housing, according to figures from the Partners for Sacred Places, a nonprofit group that helps congregations preserve old worship sites.

“Developers are naturally looking to those buildings to think about how they could be sensitively reused in a way that would preserve their character,” said Bob Jeager, who leads Partners.

Jeager said he’s seeing this happen in Chicago, New York and in parts of New England.

Driving the demand are people like Melissa McCormack. She’s an Austin, Texas, transplant who recently moved into a converted stone church with a big clock tower on a corner in Southwest Philly. It’s been renamed Sanctuary Lofts. One-bedroom rentals start for $1,500 a month.

“It feels a little less like gentrification just because, at least in the case of this building, it was just standing here abandoned before,” McCormack said standing in front of the building, which still resembles a church from the outside.

“Taxi drivers, Uber drivers are always like, ‘Are you sure this is where you want me to let you out?'” she said.

Kate Davis-Horan has a different view. She lives next to the church-to-apartment proposal back in Philly’s Fishtown, and she is worried the additional people and cars that accompany new development.

“I don’t want to see the building get torn down, but I do think we can do better than 23 teeny-tiny units in this historical building,” Davis-Horan said at a recent community meeting about the development proposal.

Indeed, Jeager said when a church takes on a new life as apartments, neighbors can feel like something was lost.

It does, however, feed the ever-growing demand for city housing.