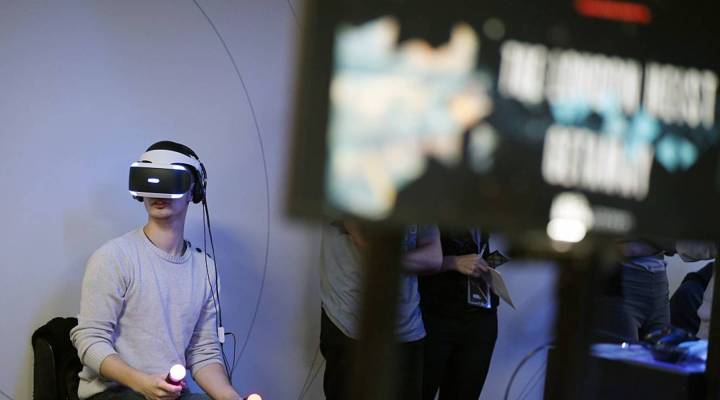 Two or three sessions into trying out the new PlayStation VR headset that is launching this week, my worst fear was realized.

I was playing the ghostly “surreal horror” game “Here They Lie,” wandering through a spooky sewage system filled with rivers of blood armed only with a flashlight. Which was pretty scary. But the real thing I should have been afraid of was my co-worker, who yelled and jumped at me at just the right moment and nearly sent me through the window of our 8th floor Manhattan offices. What a jerk.

PlayStation VR, Sony’s entrance into the fast-growing virtual reality space, launches in earnest Thursday, just in time for the holiday shopping season. If you’ve already got a PlayStation 4, it’ll run you around $399—not nearly as cheap as Google’s new Daydream headset ($79), but much less than Oculus or HTC Vive’s $1200-plus price tags. With all these companies releasing new and more affordable VR devices this year, we may actually get our first true “virtual reality Christmas.”

Software, content and hardware for virtual reality is estimated to be a billion-dollar business in 2016, and to hit $150 billion by 2020. If you talk to people who work in tech, they’re excited about virtual reality. If you talk to business people who don’t work in tech, they’re a lot more skeptical. Computing power, quality content, and just getting people to put a totally new kind of computing device on their face are all hurdles to adoption.

PlayStation VR is trying to clear all three of those hurdles in one leap: The computing power is in the PlayStation 4, the content comes in the form of video games, and gamers are traditionally early adopters—especially when it comes to devices that help them play games.

Getting the PlayStation, the headset, and the tracking camera set up requires a lot of cords, and a few outlets. If you’re not careful, you will definitely get tangled up. But beyond that setup is surprisingly easy—it took me and my friend Rory, who has a PlayStation 4 already, about 20 minutes to get everything plugged in. Of course, since we were plugging things in for the first time, there were lots of software updates to be done, so that 20 minutes quickly ballooned into an hour. Overall though the setup was pretty straight forward even for the uninitiated. Cords were numbered, software updates happened as soon as we were online, and the instructions for getting the headset ready were clear and concise. Without question, the setup of PlayStation VR is consumer-friendly.

The headset itself is also relatively easy to use, once you figure out that there’s a button on the headband that lets you stretch it out to fit over your noggin. There’s also a button on the viewer that lets you easily adjust it forward and back so that what you’re looking at is in focus. One of the general issues in virtual reality is anchoring the viewer—who most of the time is disembodied and floating in space in a given experience or environment. PlayStation VR’s solution for this is that the rig tracks the position of the controller you are holding, and this is actually quite helpful. In a normal gaming scenario, you can actually look at whatever buttons you’re pressing until they become second nature; when you have virtual reality goggles on, that’s not possible, so being able to look down with the headset on and still see your controller in a virtual reality environment is really helpful.

The biggest issue that I had while using PlayStation VR is that depending on the game or experience and your own style of play, even a 10-minute session with the headset on can leave you woozy. I love to strafe — or move sideways — when I am avoiding attacks or moving around in a game, and even with a space cleared around me, I worried at points that I was going to fall over like a sack of potatoes. As someone who can still remember rubbing my bleary eyes after a long FPS session in college, I know that getting used to an immersive environment and the impact it has on your eyes, brain, etc. is part of the deal. But I do think there’s a period of adjustment, and while it may happen more quickly for a younger player, it’s still going to happen.

Even with those challenges, PlayStation VR seems well situated to get folks already in PlayStation’s ecosystem to buy in. At first glance, updated classic Tank-shooter “Balttezone,” racer “DriveClub VR,” and space cockpit epic “Eve: Valkyrie” will help acclimate the user while delivering lots of fun. Just, you know, play it standing close to friends who aren’t going to scare you half to death. Unless you’re into that sort of thing. It is October, after all.