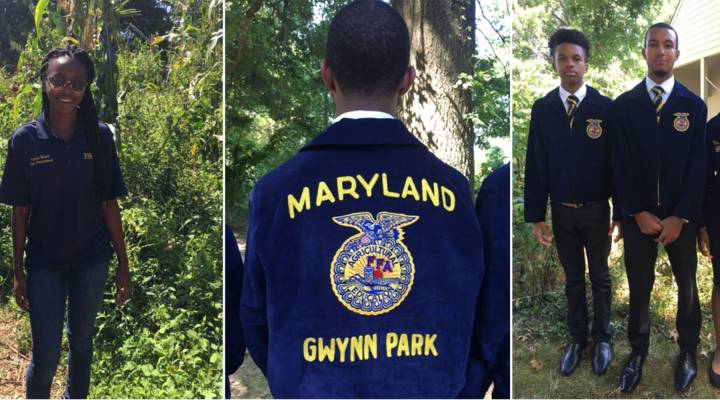 At the turn of the century 35 percent of America lived on a farm. That figure has now shrunk to just over one percent. So one might assume that stat would correspond to a decrease of interest in agriculture, which is not the case.

In fact, the National FFA Organization, or what used to be known as “Future Farmers of America” is growing by leaps and bounds.

You can easily spot a kid in FFA by the iconic blue-corduroy jackets they all wear. Seventeen-year-old Isaiah Nance is wearing his. We’re about 10 miles south of Washington DC, the suburbs essentially, but Nance gave me a quick lesson in tobacco farming.

“You have to rotate the tobacco every year to have healthy crops,” Nance said.

We spoke at an educational farm preserve in Accokeek, Maryland. Nance works on the farm through an FFA internship.

The worst thing about growing tobacco, he said, are little green horn worms, but, he has a solution.

“The horn worms usually just eat up the tobacco leaves, so we’re trying to get guinea fowl over here in this location to cut down on the horn worms,” he said.

In case you aren’t familiar, Guinea fowl look kind of like a small peacock, and they love to eat horn worms.

Over the past decade FFA’s growth has been strongest in suburban communities in like this, as well as large cities like Chicago and Philadelphia

“When we first started the program, people kind of looked at us sideways, and said, ‘well, what are you going to do, plow up [US Route] 301?’” Donald Belle joked. He’s the FFA coordinator with Prince George’s County Public Schools.

After the 1980’s farm crisis, FFA shifted focus from vocational farm skills, putting more emphasis on science and technology, which Belle said helped it expand out from rural areas and into cities.

There are over 640,000 students in FFA, the most they’ve ever had, and about 25 percent more than just six years ago.

Mark Poeschl is the CEO of FFA. I asked him if he’s still got the blue corduroy jacket.

“I do, and in fact I’m looking at my FFA jacket as we speak, hanging above my desk,” Poeschl said

Even though actual farm jobs account for about on  percent of all jobs in the US, Poeschel says roughly one in 12 is agriculture-related, and FFA students are on the fast track to fill those jobs.

“A company like John Deere in their precision agriculture unit employs over 2500 computer programmers to help them develop their next generation of farming equipment,” Poeschl said.

There are also other companies besides John Deere that are looking for a new kind of labor force.

Paul Lightfoot is the CEO of BrightFarms an ag-tech startup. He’s having such a hard time finding qualified workers he’s taken matters into his own hands.

“We’re actually creating a huge apprentice grower force, just because we don’t trust that the market is going to give us good growers,” Lightfoot said.

He says FFA’s emphasis on food science along with other skills like logistics and communication are the things he’s not finding in the broader horticulture and agriculture industry.

“None of those are producing what I want, which are food growers in greenhouses, but who really understand, almost like a manufacturing … process culture.”

Unlike FFA members of the past, many of the students driving FFA’s growth have to go back quite far in their family trees to find a connection to farming.

“I mean, personally I didn’t grow up on a farm, but, my great grandfather had pigs,” Tyler Reid said, a junior at Maryland’s Gwynn Park High School.

Reid was in charge of planting a vegetable garden as part of her farm internship. She said she has no particular desire to raise livestock, like her grandfather, however she is studying to be an environmental engineer, and working on the farm is a nice break from all the lab and science classes she has in school.