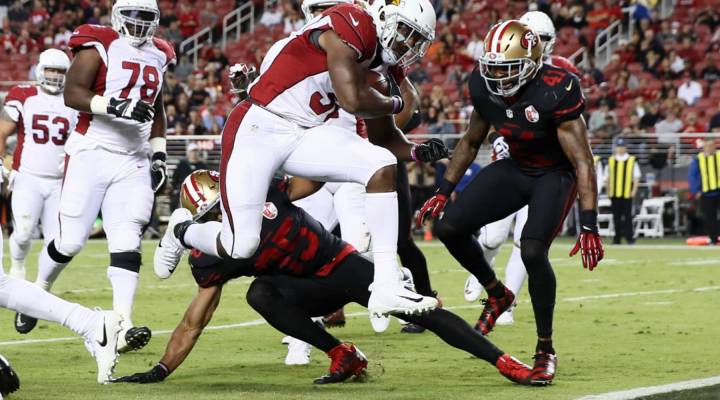 COPY
David Johnson of the Arizona Cardinals scores a touchdown on a four-yard rush against the San Francisco 49ers during their NFL game on Thursday. Ezra Shaw/Getty Images

David Johnson of the Arizona Cardinals scores a touchdown on a four-yard rush against the San Francisco 49ers during their NFL game on Thursday. Ezra Shaw/Getty Images
Listen Now

Television networks have been sweating the loss of viewers to services like Netflix and Hulu. One of the stalwarts against the decline has been live sports, but even that viewership is down. It now seems the big one, the NFL, may finally be feeling the loss too.

Viewership of live broadcast football games is down 10 percent from last season, according to data from Nielsen. The biggest loss is in the prime time slots. Monday Night Football on ESPN is off 17 percent.

A big opponent of the television broadcasts has been the election. The first presidential debate took in a historic 84 million viewers. The second debate this Sunday will likely detract from viewership of the game between the New York Giants and the Green Bay Packers.

Other factors behind the ratings dip could be missing stars, like suspended Tom Brady, injured Adrian Peterson or retired Peyton Manning. There are also more ways to watch, with the ability to stream the games on tablets, smartphones and Twitter. Nielsen doesn’t track every viewing method.

Whatever the reasons, Bloomberg reports that networks are having to give away more free ad time to make up for fewer eyes.