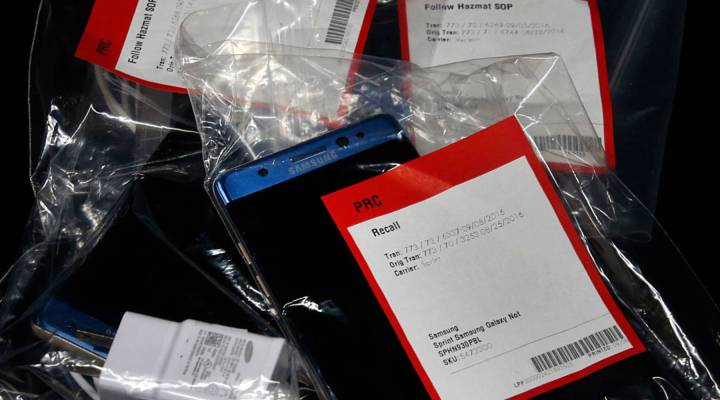 COPY
Several Samsung Galaxy Note 7's lay on a counter in plastic bags after they were returned to a Best Buy on September 15, 2016 in Orem, Utah. Photo by George Frey/Getty Images

Several Samsung Galaxy Note 7's lay on a counter in plastic bags after they were returned to a Best Buy on September 15, 2016 in Orem, Utah. Photo by George Frey/Getty Images
Listen Now

Samsung, the South Korean electronics company, faces new scrutiny and potential damage to its reputation, after a Samsung smartphone overheated and began smoking on an airplane waiting on the tarmac in Louisville, Kentucky, causing the passengers to be evacuated.

The owner of the phone told news organizations that it was a Samsung Galaxy Note 7 that had been replaced by the company several weeks ago, as part of the company’s recall of its phones worldwide. There is a risk that the phone’s lithium-ion battery can overheat and melt elements of the phone.

Samsung emailed a statement to Marketplace stating: “Until we are able to retrieve the device, we cannot confirm that this incident involves the new Note 7. We are working with the authorities to recover the device and confirm the cause. Once we have examined the device we will have more information to share.”

Samsung was already reeling from the recall last month of the new Galaxy Note 7, which is meant to compete with Apple’s just-launched iPhone 7.

The recent incident, if it is confirmed to involve a replacement Galaxy Note 7, could be disastrous for the company’s reputation, said business professor David Ross at the University of Florida, by creating “a general sense in the public that, ‘Oh my god, this is the most dangerous phone ever.’ That’s why it’s so important for them to try do deal with this—‘We made a mistake, it’s never going to happen again.’”

Troy Stangarone at the Korea Economic Institute said that until now, Samsung has been dealing fairly well with the widely-documented battery problems with its Galaxy Note 7. He said the company got ahead of the story by announcing a global recall quickly, issuing software patches and getting replacement phones out right away.

“I think they’ve tried to be as customer-friendly and efficient as possible,” said Stangarone. “But the longer the story goes on, the more questions people will have about Samsung’s phone, and whether they should consider it or consider an alternative.”

West Virginia University management professor Usha Haley said  Samsung has already lost too much ground in its competition with Apple to salvage the Galaxy Note 7 with further repairs and replacements.

“When government agencies in the United States flag it as a danger,” said Haley, “that’s a huge hit to the brand name. Samsung should just get to the next generation, the next item, the next model.”

Haley said Samsung is already trailing Apple in its reputation for innovation, and she said the company needs to shift focus to its next major challenge: competing for new customers in China, the world’s biggest smartphone market.