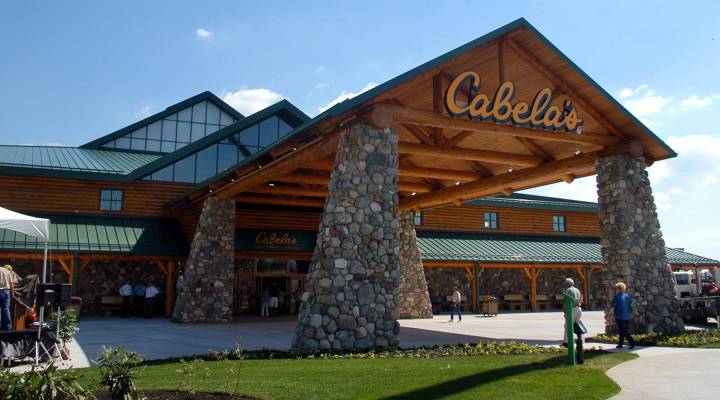 The deal combines two of the biggest outdoor retailers and signals a shift in a rapidly-evolving sporting goods industry.

The merger would create more than 180 locations, each featuring its trademark mix of guns, fishing and camping gear, clothing and of course, taxidermy. So. Much. Taxidermy.

“The long-term opportunity is,  it is a larger retailer. They’ll have a little more power of their supplies,” said Andrew Burns, an equity research analyst at D.A. Davidson.

“I think this is the natural evolution of the space to a few, stronger competitors,” he said.

The sale was prompted by pressure from an activist investor, Elliott Management, a hedge fund known for pushing companies into buyouts. Elliott has an 11 percent stake in Cabela’s.

Bill Smead, of Smead Capital Management says Cabela’s was vulnerable because of inconsistent revenue growth.  Specifically, it wasn’t able to increase sales of higher-margin items like clothing and shoes.

“They didn’t prove to be good merchandisers, when gun sales slowed down in the last 2-3 years,” Smead said.

One thing Cabela’s did do well was banking, with its customer-loyalty credit card program.

As part of the deal, Capital One Financial would take over the credit card business, but Bass Pro will still see a cut for every new credit card it sells. Which Smead says could be good business for Bass Pro. “By perpetuating the loyalty and credit card program, they’ll get hundreds of millions of dollars per year in revenue.”

Smead pointed out that the combined operations will create some redundancies, so there could be some reductions. However, he doesn’t expect to see any immediate store closures as a result of this deal.